Do you ever have those trips to the same mountain when you continuously fail and need to turn back down over and over again? That was Triglav for us. The otherwise friendly mountain and the pride of every Slovenian can quickly turn an ugly face in less than perfect conditions. 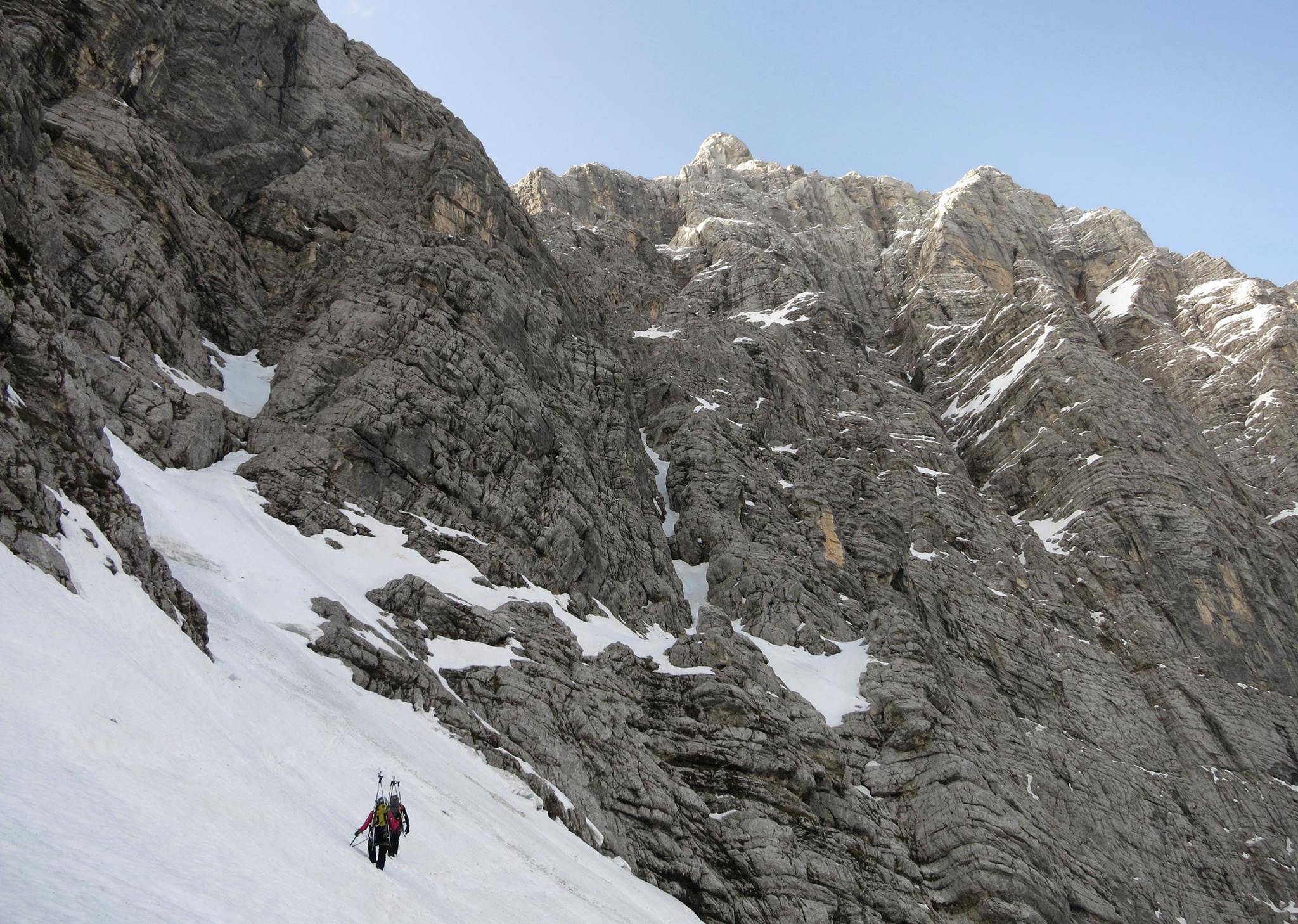 For the past few months we had been planning to return to Triglav. Ever since our first two trips this year, when we struggled to climb it in snow, but failed to reach the summit in the end due to unstable snow conditions, we had wanted to return if only to actually stand on the actual summit of the highest mountain in Slovenia. However, the prospect of hiking the Julian Alps last week looked remote with unstable weather and possible thunderstorms. Not ideal.


Not the ones to be deterred, our team were in sky-high spirits when we met early in the morning in the Krma valley that day. Our guide for the trip was an internationally certified mountain guide with more than two decades of experience in the Slovenian Alps and elsewhere in the world. That’s two decades of experience to keep us all safe in whatever conditions that lay ahead. Also, the weather looked pretty nice and sunny in the morning. 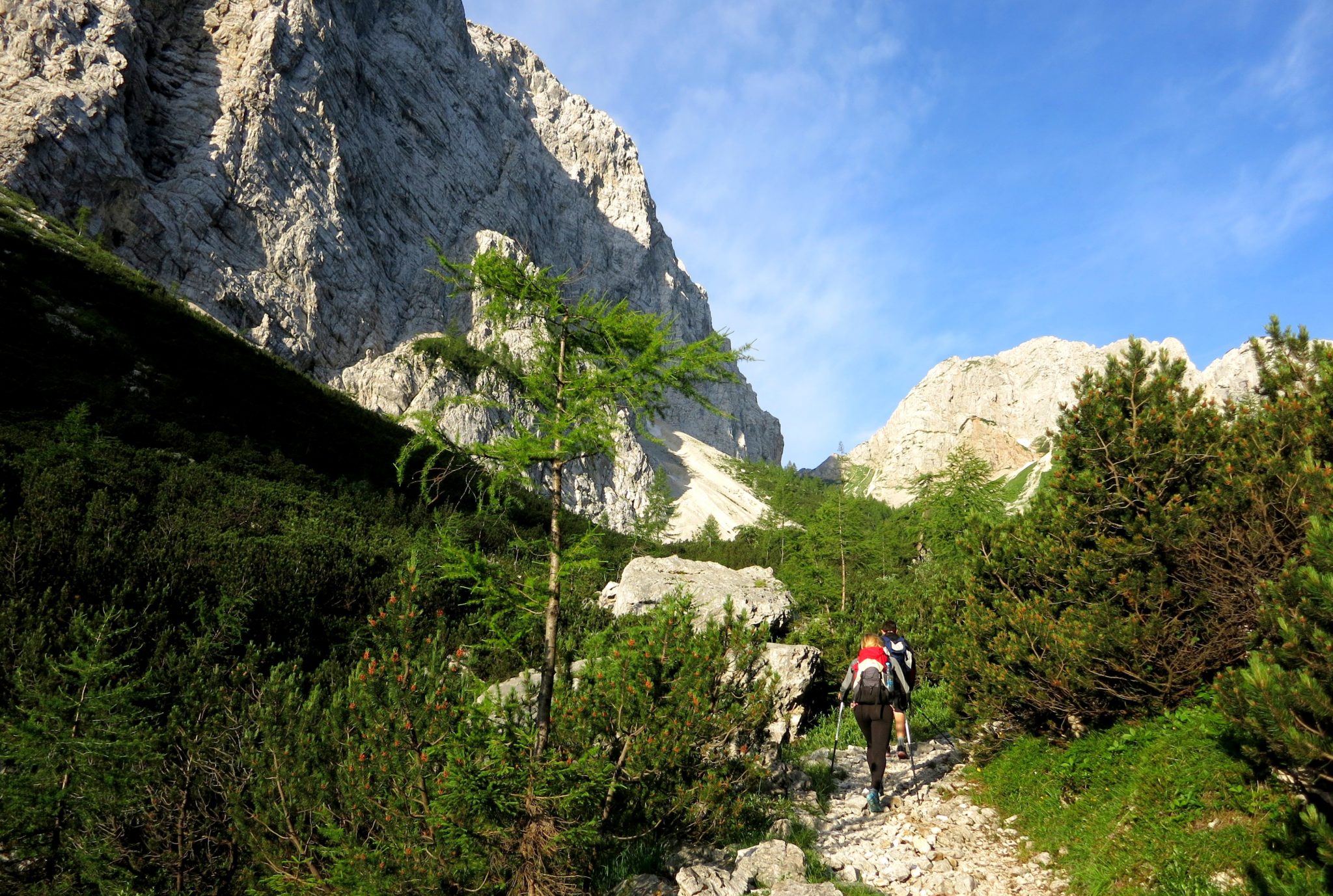 Five of us started in the Krma valley and hiked the first couple of miles quickly. Our plan was to reach the summit as soon as possible and thus avoid possible afternoon thunderstorms at the top or somewhere else equally exposed. Thankfully, we did find some time to admire steep faces of the high mountains surrounding us as they were just stunning. So many amazing peaks and so little time! We soon bumped into cattle on the way which seemed completely unaffected by passing visitors and continued to chew on soft grass without even blinking. 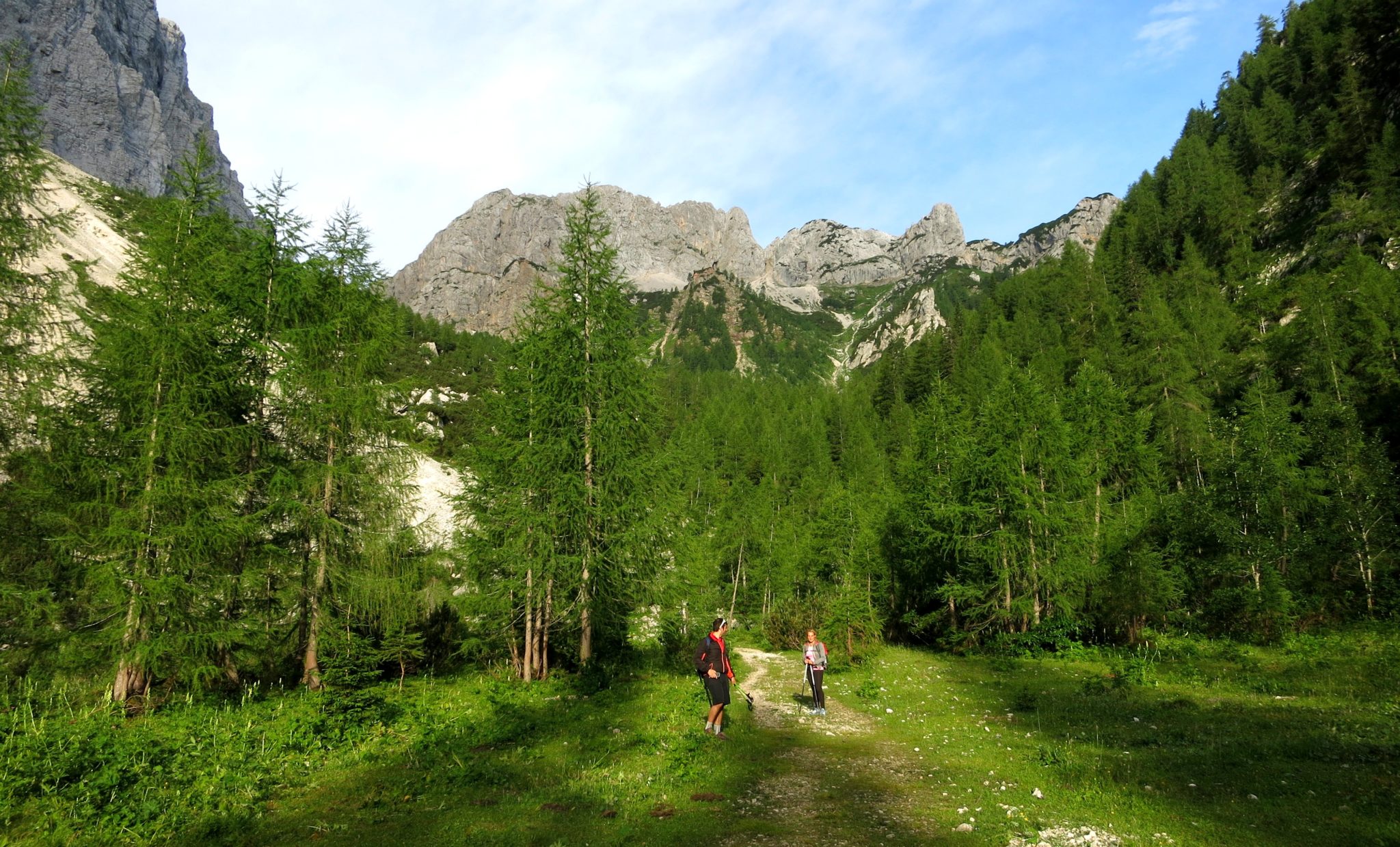 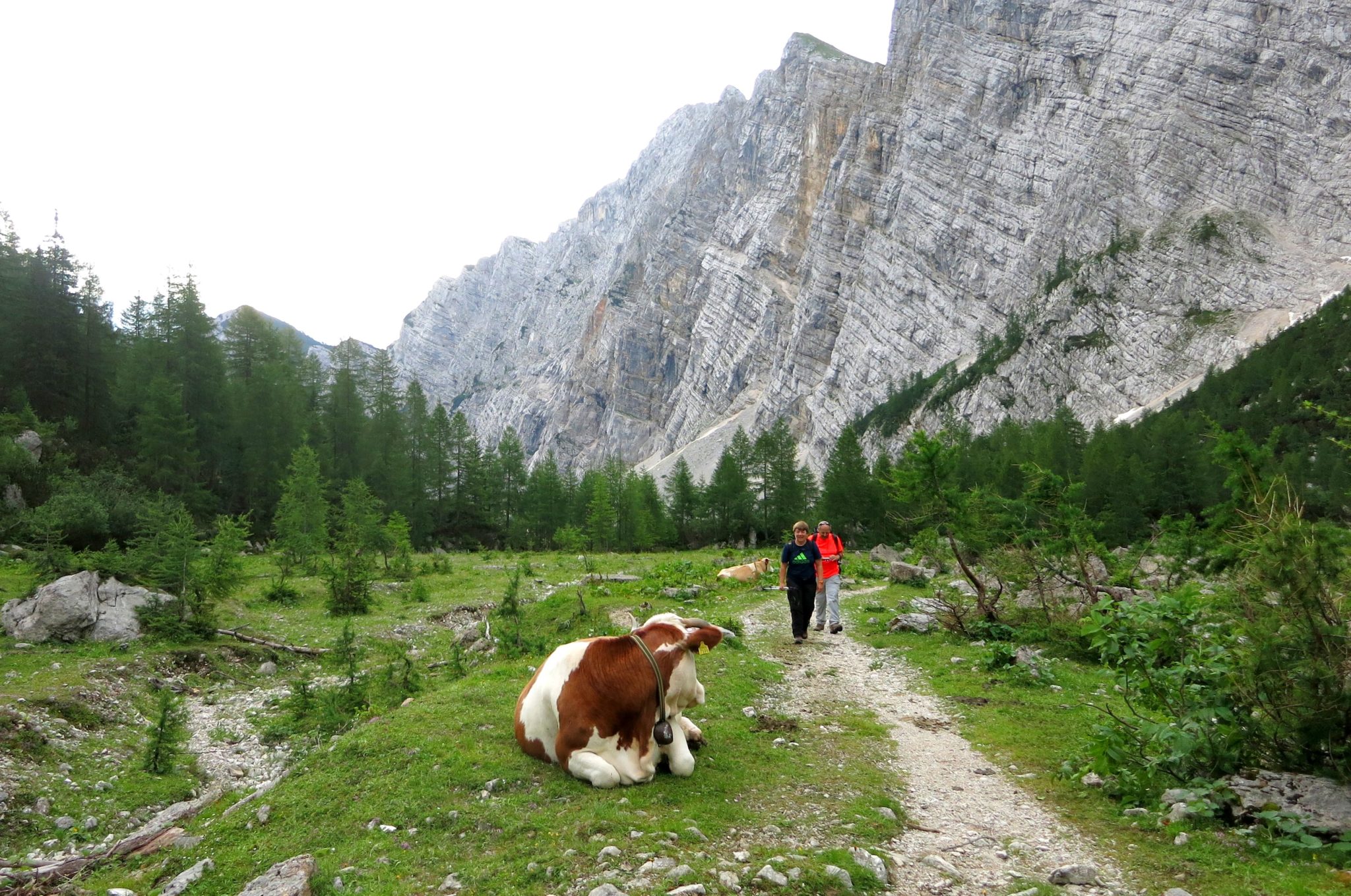 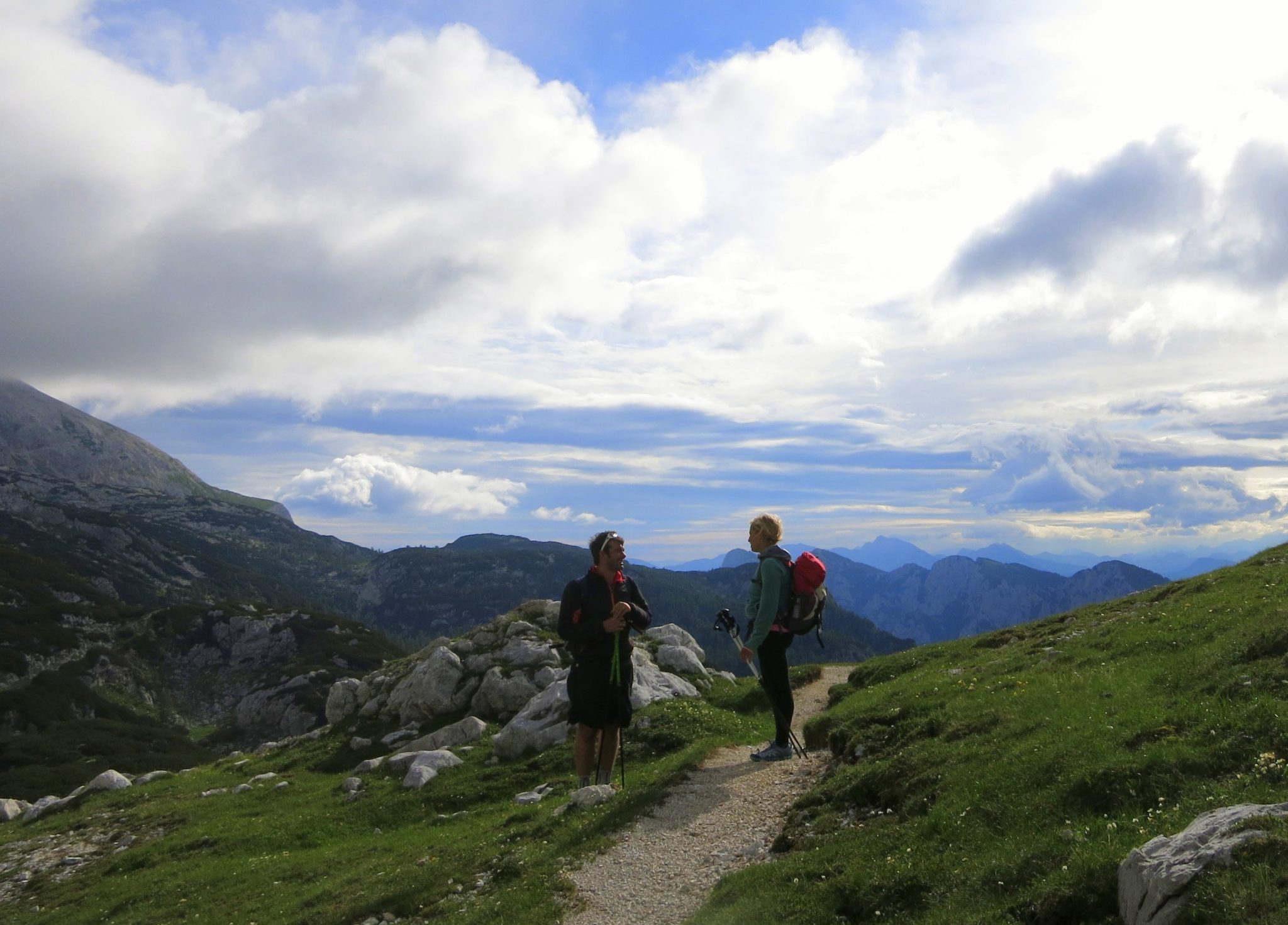 As we kept gaining altitude, we watched the ominous dark clouds slowly roll in. There was no way to avoid it; we would soon get wet, but most importantly, heading for the summit looked highly risky.
We eventually reached the Planika mountain hut, surprisingly so, the rain still hadn’t come. Instead, the wind had gained in strength and was blowing really hard. Those of you who have already been at the top of Triglav know that the last part is the trickiest of the whole route, and offers little shelter in case of the weather suddenly worsening. Seriously not ideal. But we decided to give it a try nevertheless.

Our spirits were still high and we were having a blast. There is nothing like uncertainty – the thrill whether or not the mother nature would let you continue or force you back down. As for our guide, instead of ending the adventure right there in the Planika hut, where others hikers stayed waiting for a possible window of nicer weather, he rather tied us to his rope to make the adventure safer. 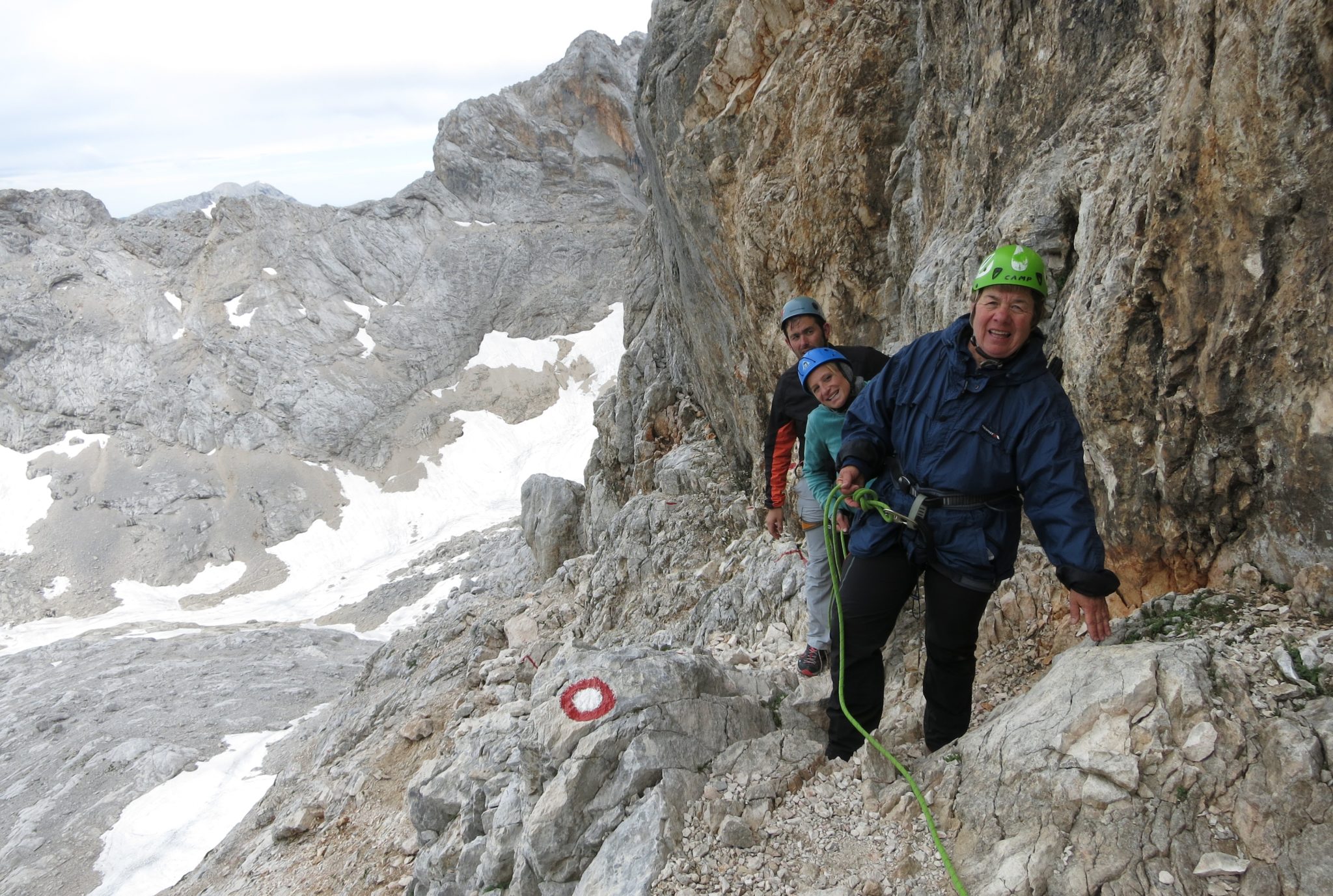 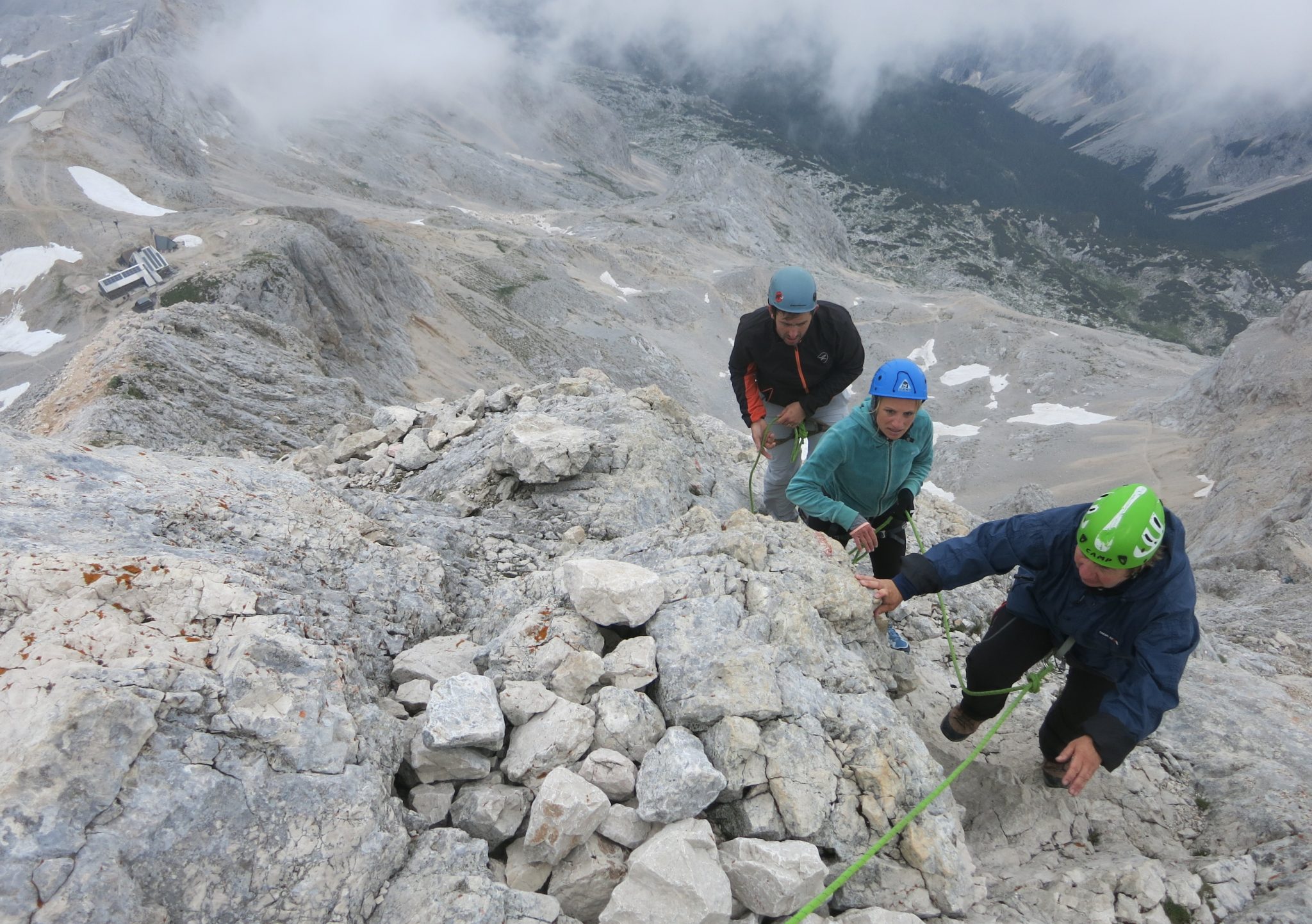 At some point the clouds even cleared up a bit and stayed like that for about an hour, filling us all with hope to be actually able to set our feet on Slovenia’s highest mountain, but then slowly crept back in again. The wind was blowing in a relentless manner and showed no signs of subsiding in the near future. We continued climbing nonetheless until we couldn’t anymore. 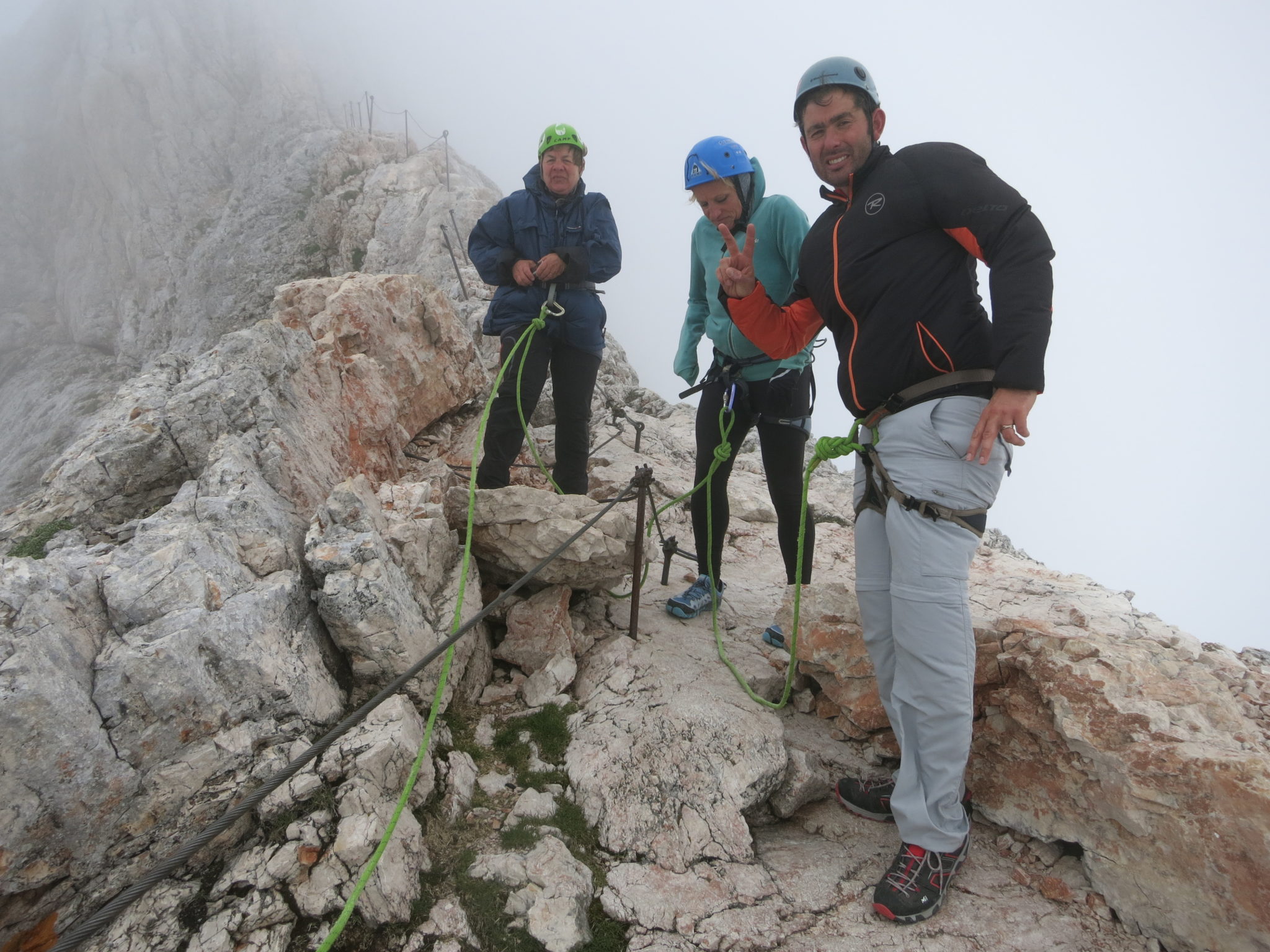 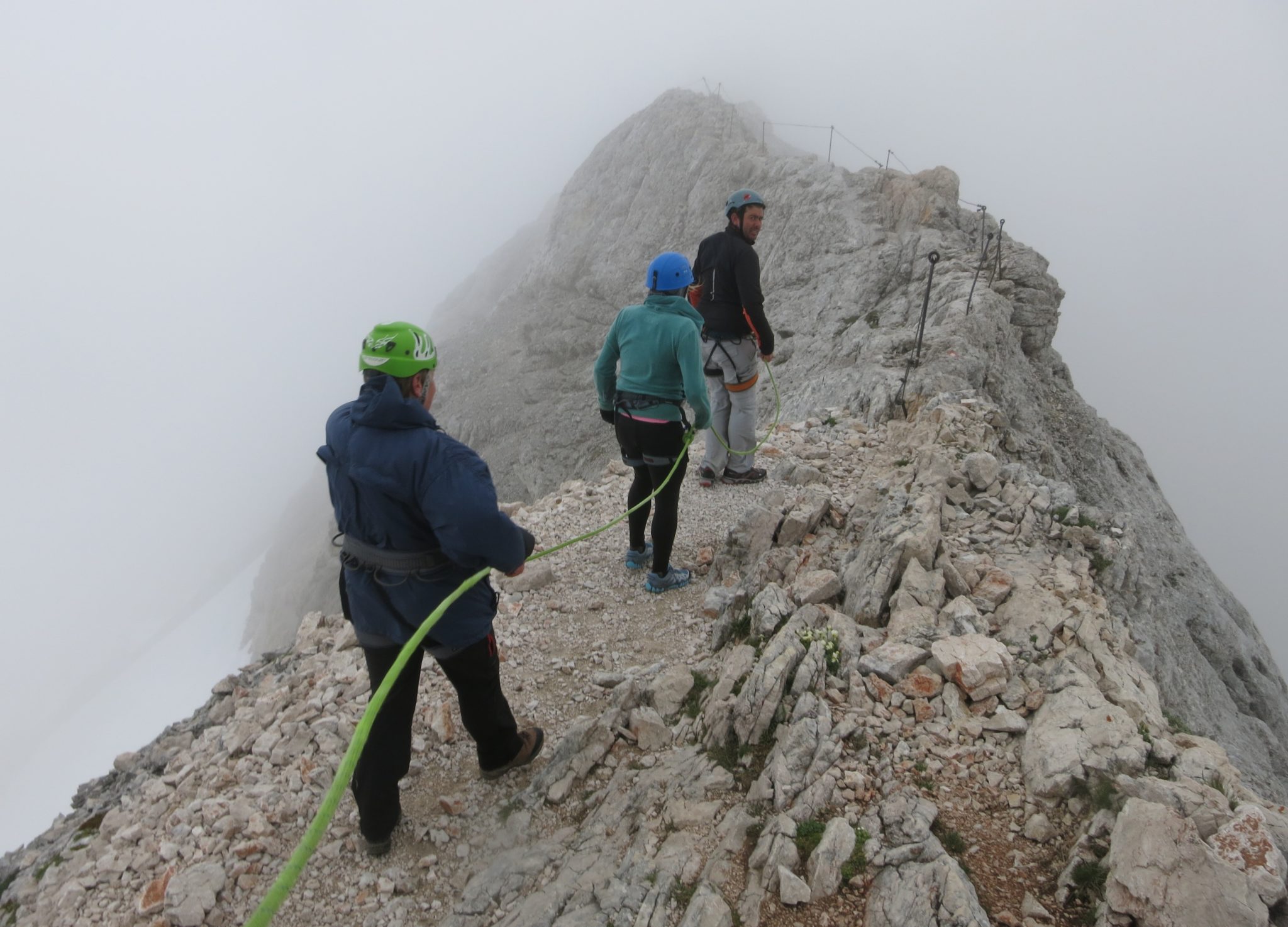 A little further up from Mali Triglav the path narrowed to the point it was practically impossible to continue safely in given conditions. We called it a day, snapped a few photos, cheered to our great achievement, and then triumphantly descended back down to civilization. 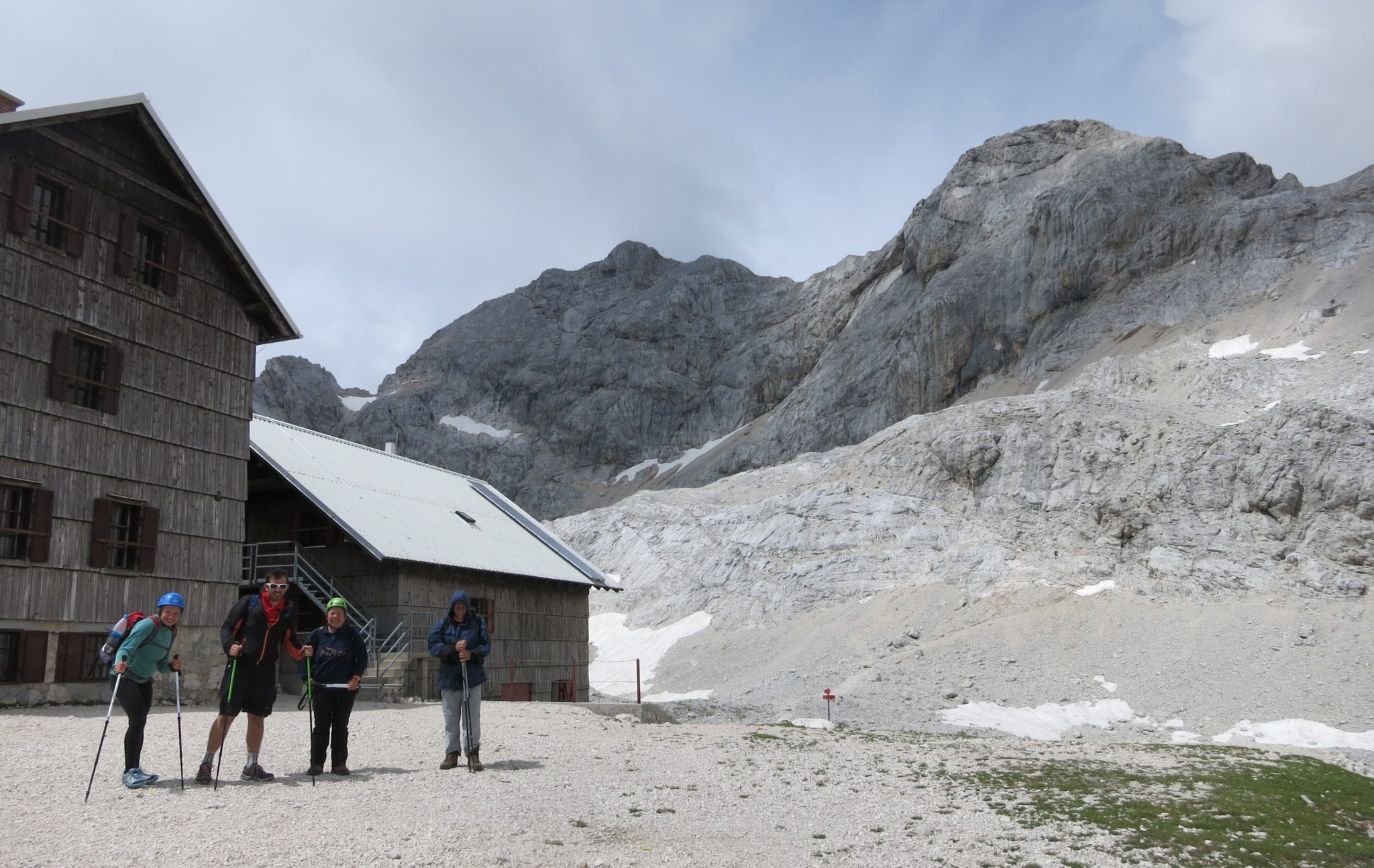 Now that the group was back to colorful meadows, refreshing water springs and the warmth of the valley, the black clouds and heavy winds seemed like a thing of the past. We spent the entire evening eating pizza and laughing over our third failed attempt to reach the summit of Triglav this year. It’s funny how the mountains usually accept us with open arms, but then on other occasions can be so incredibly determined to just heartlessly chew and spit us out without any hesitation. Yeah, well, I guess that’s life – extraordinary and full of surprises on the way. Until next time!

The second day of our 3-day From Bohinj to the Soča Valley Trek starts right at this beautiful Alpine lake, Lake Krn, which also happens to be the biggest lake in the Slovenian mountains. 😍😍 From the lake we hike up to Mt. Krn, the high mountain in the background (see the video to the end), and then descend down to the Soča Valley… www.exploringslovenia.com/tours/from-bohinj-to-soca-valley-trek/Interested in joining us on a tour here? Write us at info@exploringslovenia.com or drop us a message here! ...

The 2nd day of our 3-day From Bohinj to the Soča Valley Trek starts right at this beautiful Alpine Lake Krn, the biggest lake in the Slovenian mountains. See tour details: https://www.exploringslovenia.com/tours/from-bohinj-to-soca-valley-trek/

The hut at the Triglav Lakes from different angles

On the fourth day of our recent From Bohinj to the

Immerse yourself into the crème de la crème of e

I had started a 4-day tour to the Triglav Lakes, K

A new adventure to the mountains starts today and

The king of the Alpine world 💪♥️ Photo by


Cycling to and exploring the glacial valley of the Kamniška Bistrica 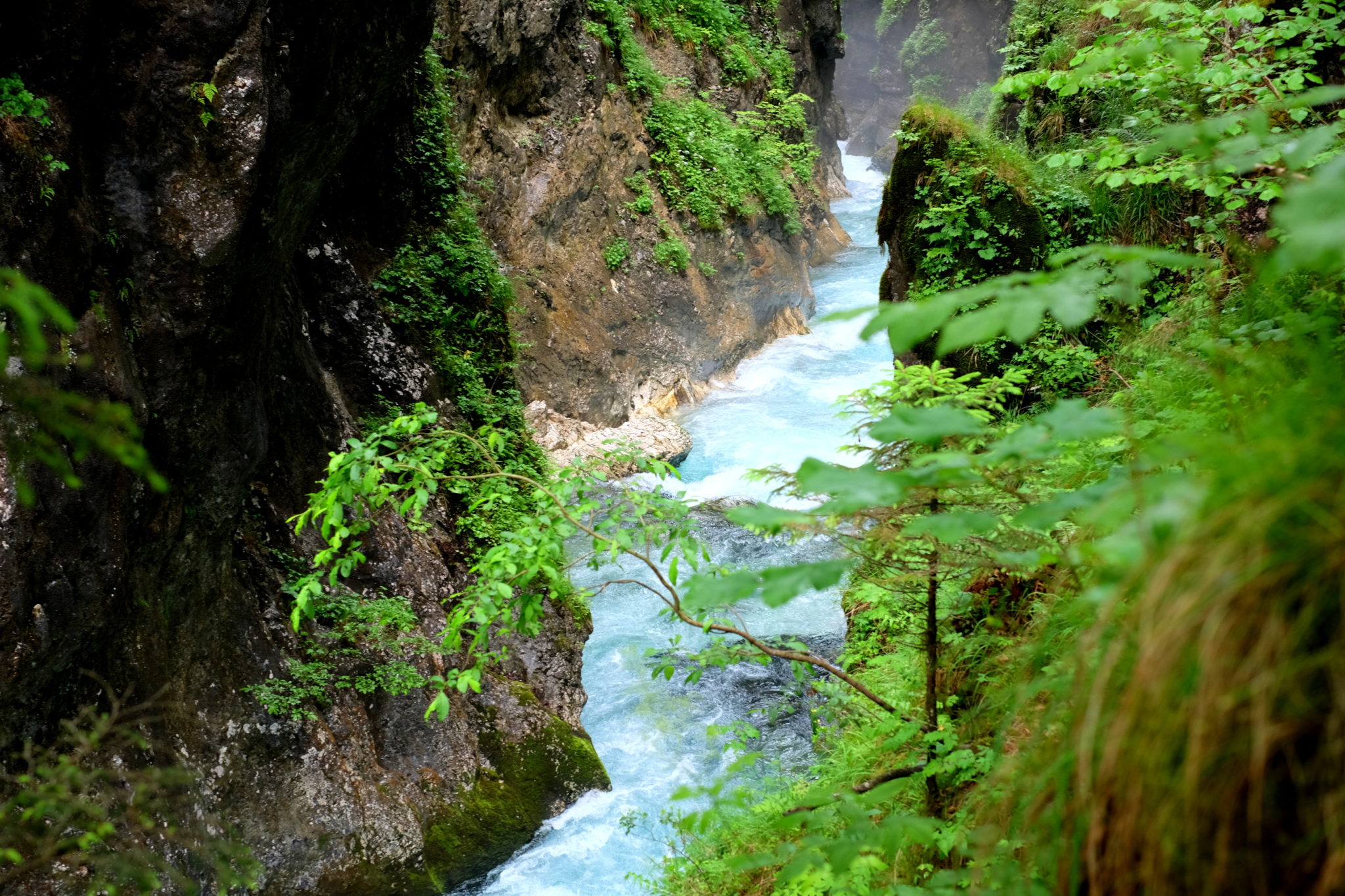 
The Slovenian Alps are so much more than just Triglav: Križ & Stenar 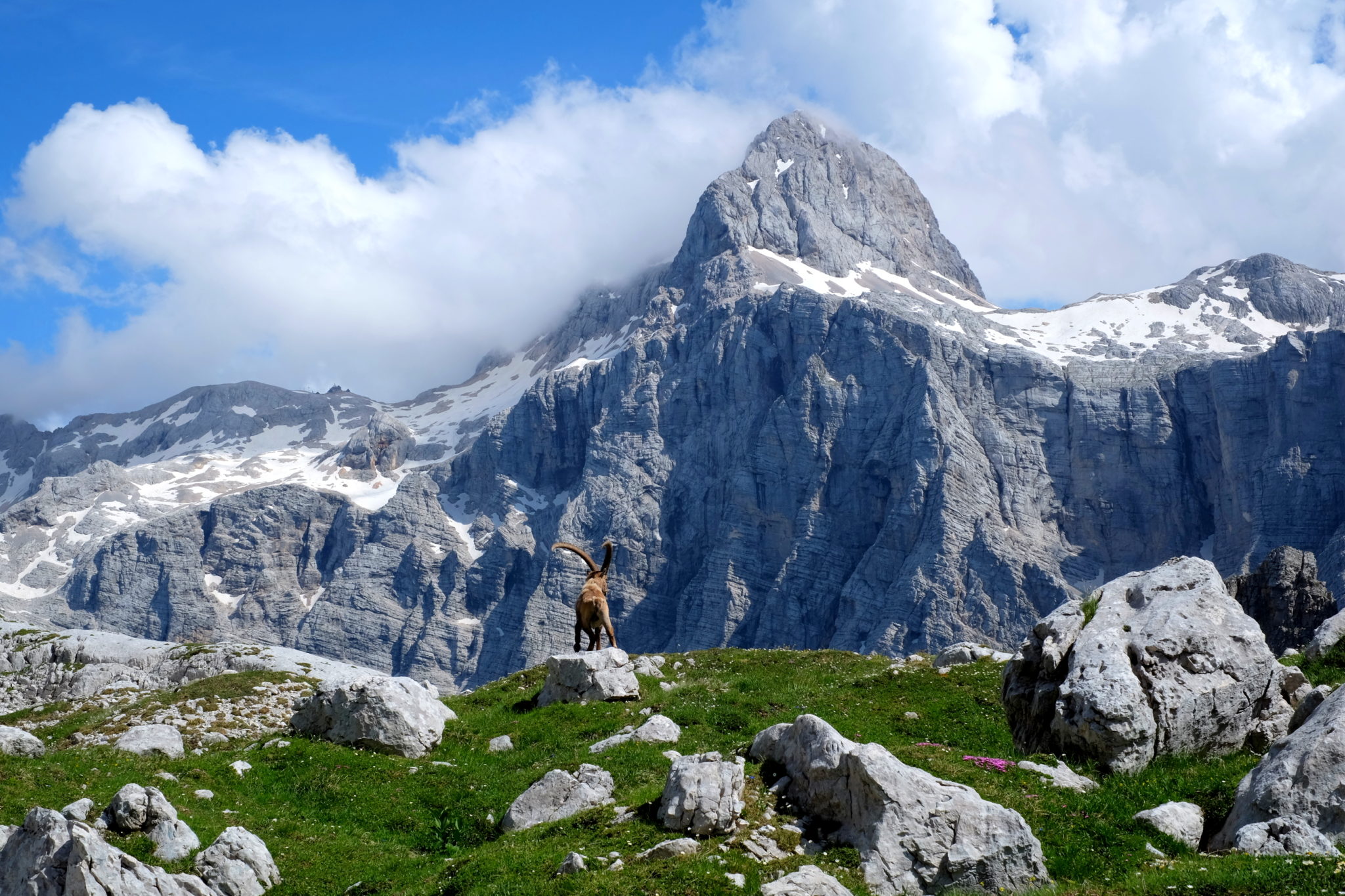