When making my way across the highest peaks of the Kamnik-Savinja Alps at the beginning of August, I looked 1,500 meters down from the top of Mt. Planjava, and played with the idea of returning to the same Alps, only instead of going up from the south I would set my base in the north, in Logar Valley. Interwoven with breathtaking green trails that usually end somewhere way up in the high mountains, beautiful tranquil trails along the Savinja River and countless little wild streams in the broader Solčava Valley, the 7-kilometer long Logar Valley is by far one of the most picture-perfect glacial valleys in Europe. As it turned out, it was indeed perfect for yet another hiking, via-ferrata and flyfishing adventure. Flyfishing on the Savinja River First of all, for those of you who don’t have the slightest idea of what fly fishing actually is {and I really can’t blame you!}, let me explain. Fly fishing, at its core, relies on catching fish with an artificial bait or “fly” such as colored feathers, plastic fish and small pieces of wool {I know! And I thought catching fish with bread was hard!?}. Professionals say it’s a more sporty way since you have to put considerable effort into spotting the fish, throwing the fly in the right spot, directing it to flow nicely above the swimming fish, and then jerk the rod as soon as the fish bites {instead of just rolling little bread balls like in the golden days…}. It’s super fun and relaxing, plus, once you get the first bite, it’s not only the fish who’s hooked, guaranteed! 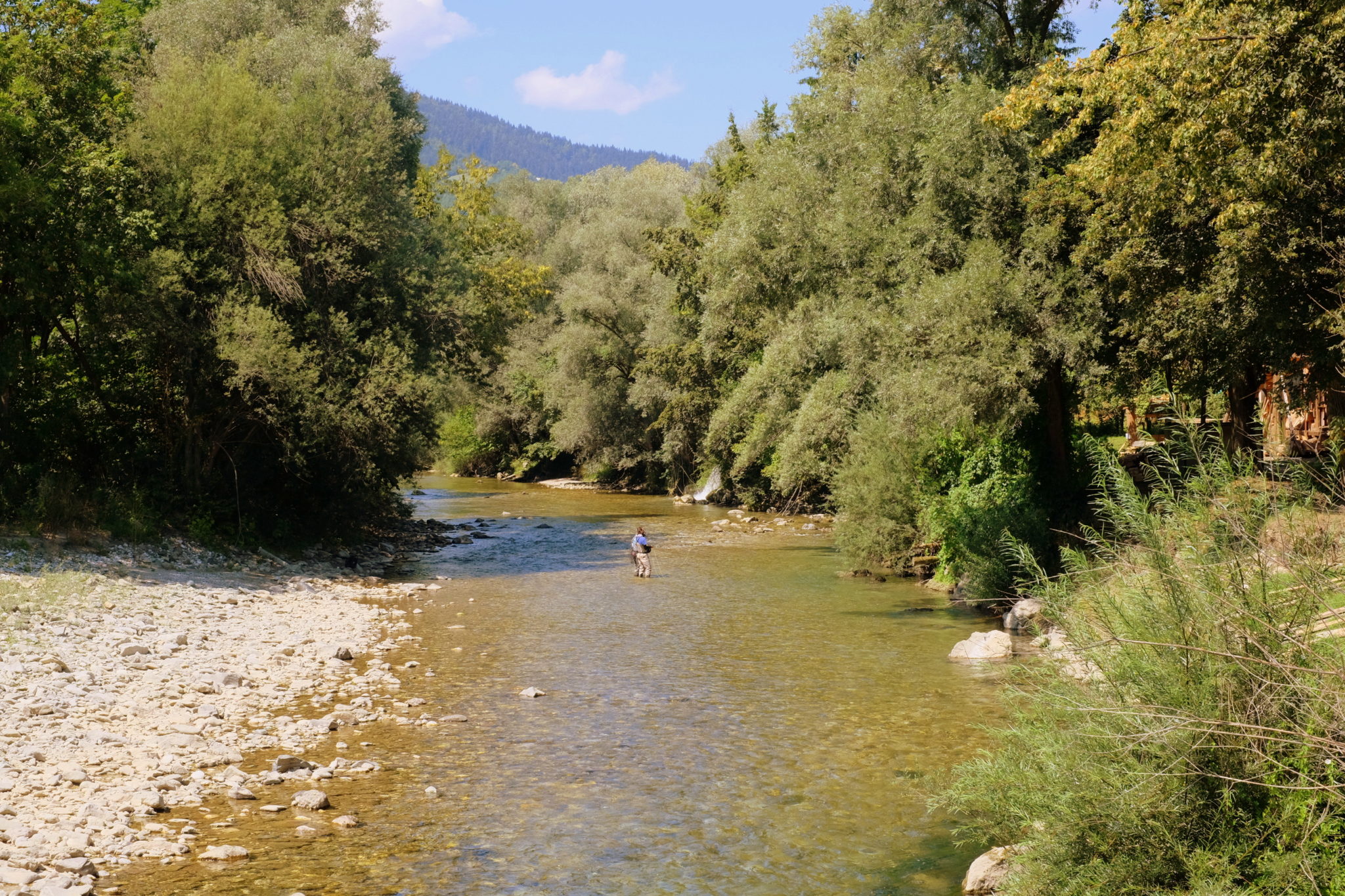 Fed with waters from high atop the Kamnik-Savinja Alps, the Savinja River has developed into one of Slovenia’s best trout streams. With the spring high in the mountains, the water flows down into a dramatic waterfall called Rinka, crosses lush and green forests and meadows of Logar Valley, Upper and Lower Savinja Valley, and eventually merges with the Sava River in the town of Zidani Most. Each winding path of the Savinja Alps water in Logar Valley provides its own outstanding flyfishing experience, fishing for brown trout, rainbow trout, grayling, and Danube salmon. As there are certain limitations and law restrictions on flyfishing in the area, it might be a good idea of checking it with a local service provider such as Go Flyfishing Slovenia I opted for. Hiking and via-ferrata climbing in the Kamnik-Savinja Alps Among the most photographed places in Slovenia, Logar Valley lets you soak up cinematic vistas of jagged mountains towering above a green valley, whose bright colors are as necessary as they are spectacular. The best thing? While the crowds prefer to stay in the valley or to hike fifteen minutes up to the famed Rinka Waterfall with its 105-meter drop, only a few decide to continue to follow the trail up the real mountains. Yet just there, at almost 1,400-meter elevation, nested in the midst of a gray world of high peaks, lies a small and cosy mountain lodge called Okrešelj, where my unique mountain adventure began a few weeks ago.

For beautiful rooms with a view over Logar Valley, you might want to check the Tourist Farm Juvanija.

I arrived at the Okrešelj Hut with two of my good friends late in the afternoon. The cheerful rhythms of Slovenian mountain classics were already playing outside the hut, tasty chicken slowly grilling, and a friendly group of hikers and hut-keepers, who happened to be the most open and outgoing group of people I’ve ever met, immediately accepted us as part of the gang, pouring us wine and other homemade drinks. Later in the evening, when eating tasty chicken with bread and tomatoes, playing cards, and welcoming more climbers trickling in, still in their climbing harness and helmets, while the happy group outside continued to have fun in their own parallel world, I realized just how incredibly lucky we were to be a part of it. To experience that unforgettable atmosphere of the somewhat forgotten parts of our little land on the sunny side of the Alps. 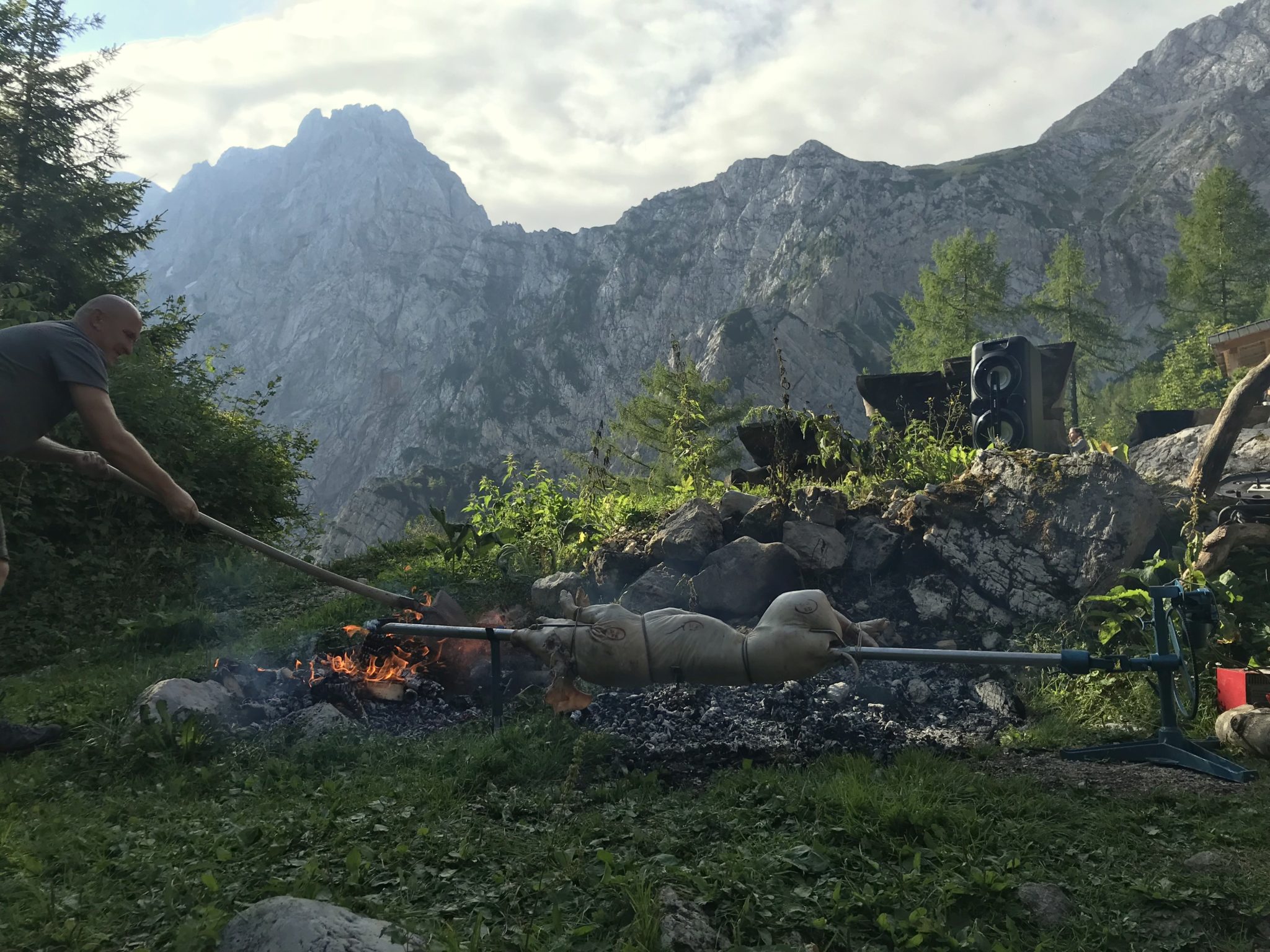 The new day brought new challenges. With pork already grilling outside in the same lively rhythms of the last night, we headed towards the high mountains right after breakfast (… at 9 ?). The plan was to do a via ferrata up Mt. Koroška Rinka, 2,433 m, from the direction of the Savinja Saddle, and then descend back down an extremely steep gorge called Turski Žleb. Altogether marked for eight hours, while the route both up and down technical and exposed. 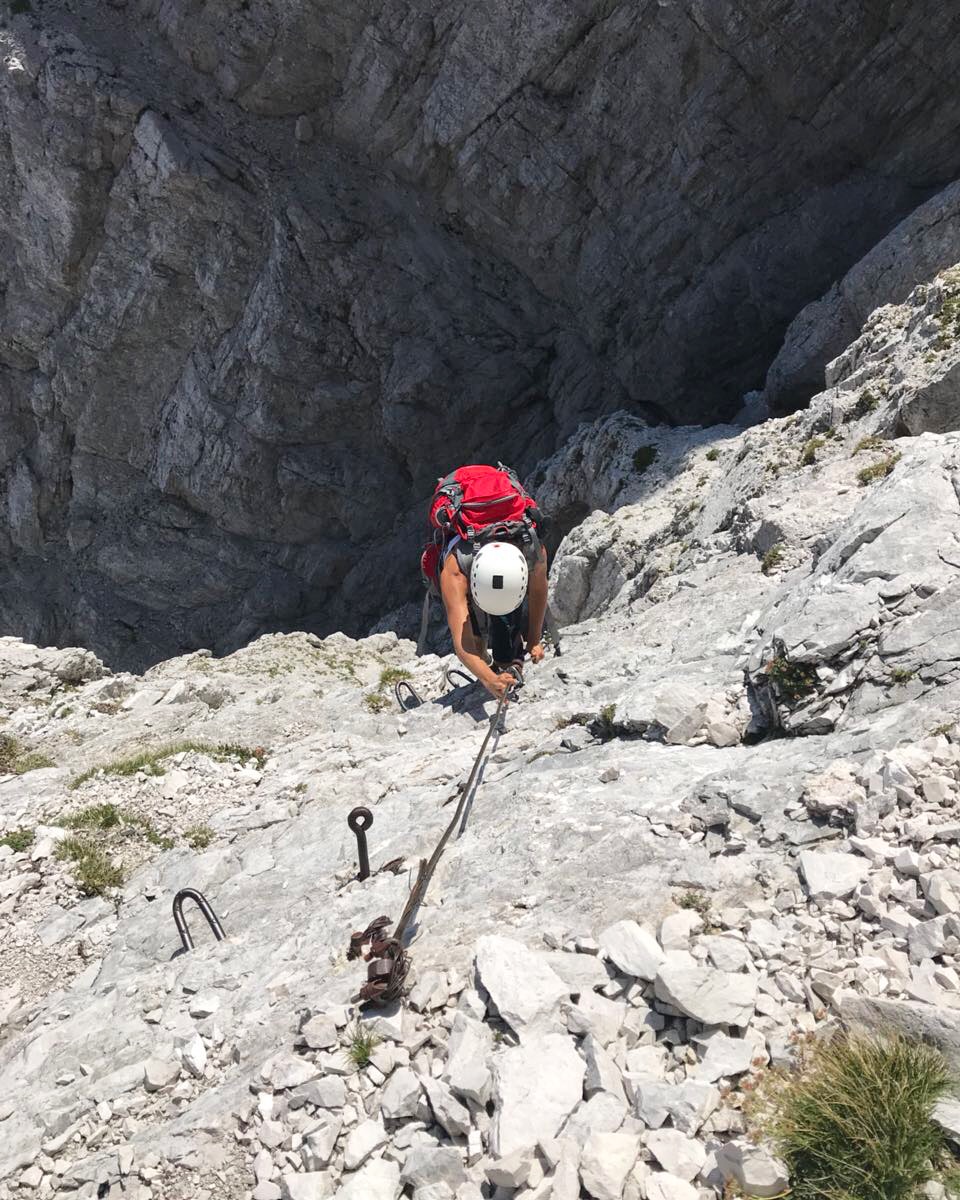 All in all, the climb was fantastic! It was challenging alright, and needed to be tackled with all respect and carefulness, yet the beautiful emotions of triumph immediately outweighed the effort. So, if you’re into mountain climbing, don’t have a soft spot for exposure, and enjoy long and challenging climbs; I say go for it! And even if you’re not, go to Logar Valley, try out flyfishing, hike to the Okrešelj Hut and get a taste of what life in the mountains should all be about. Friendship, fun and stunning scenery! Loved it! Stay tuned for more outdoor adventures! Join thirty thousand Exploring Slovenia fans by liking us on on Facebook, Twitter, and Instagram. If you enjoyed this story, sign up for the monthly exploringslovenia.com/blog newsletter. A handful selection of stories from Hiking and Climbing in Slovenia, delivered to your inbox every month. Looking for a gorgeous tour in the mountains? Exploring Slovenia offers guided hiking and climbing tours!

Surrounded by fifteen 2000-meter peaks, this picturesque Alpine valley Loška Koritnica is also called a valley of a hundred waterfalls. It got its name after many gorges (Slo. Korito) that the Koritnica river made on its way to the Soča river. And the peaks above the valley? Mangart, the third highest of Slovenia, Jalovec, the sixth highest, Jerebica, Rombon,… Intrigued to visit it? 😍Photo by 📸 @darjovolaric ...

Surrounded by fifteen 2000-m peaks, this picturesque Alpine valley Loška Koritnica is also called a valley of a hundred waterfalls. It got its name after many gorges (Slo. Korito) that the Koritnica river made on its way to the Soča river. Intrigued to visit it? 📸 @darjovolaric

The best views come after the hardest climb (the o


Traversing the Kamnik-Savinja Alps across the highest peaks 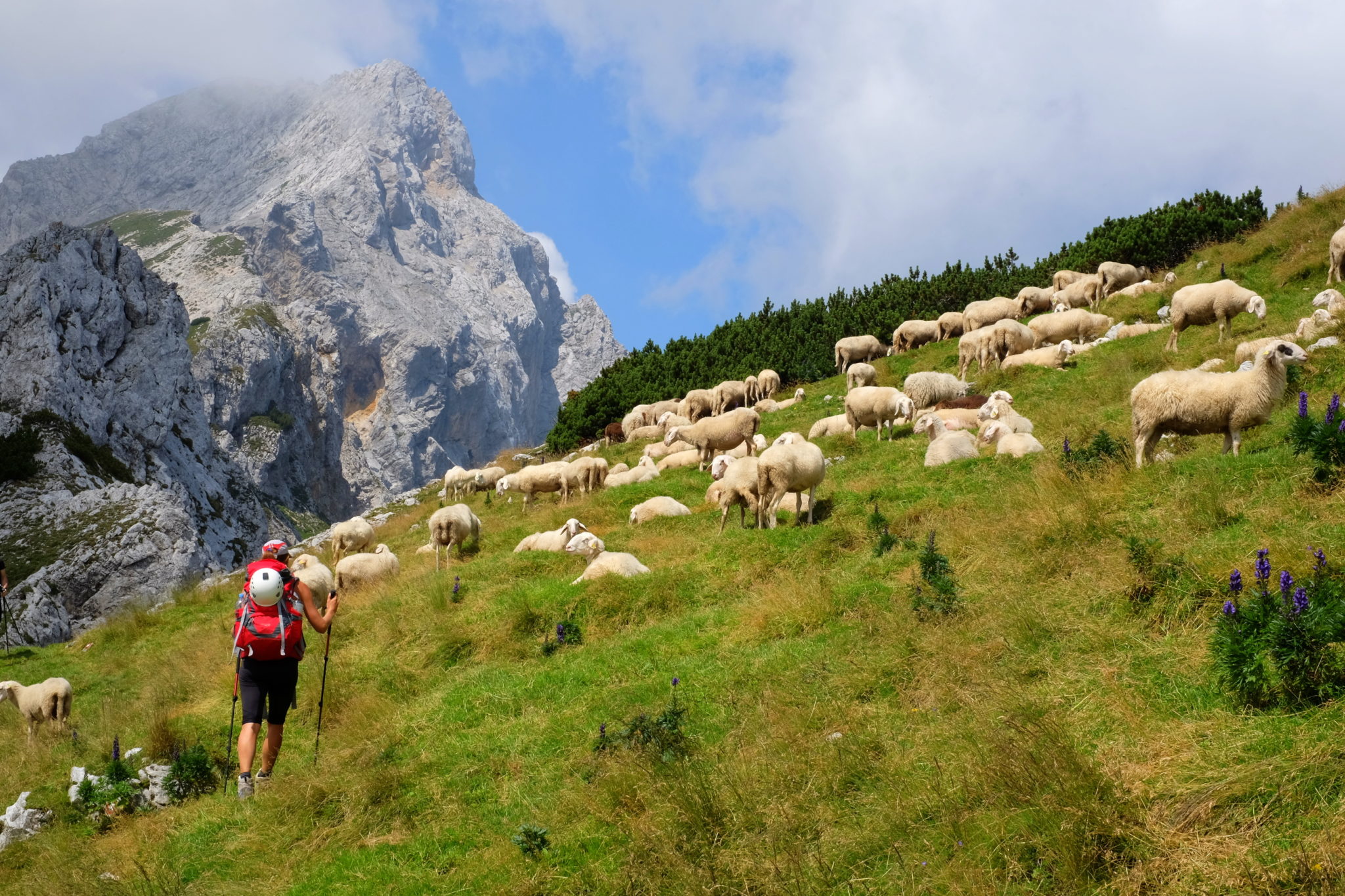 
A surreal via ferrata above Lake Bohinj 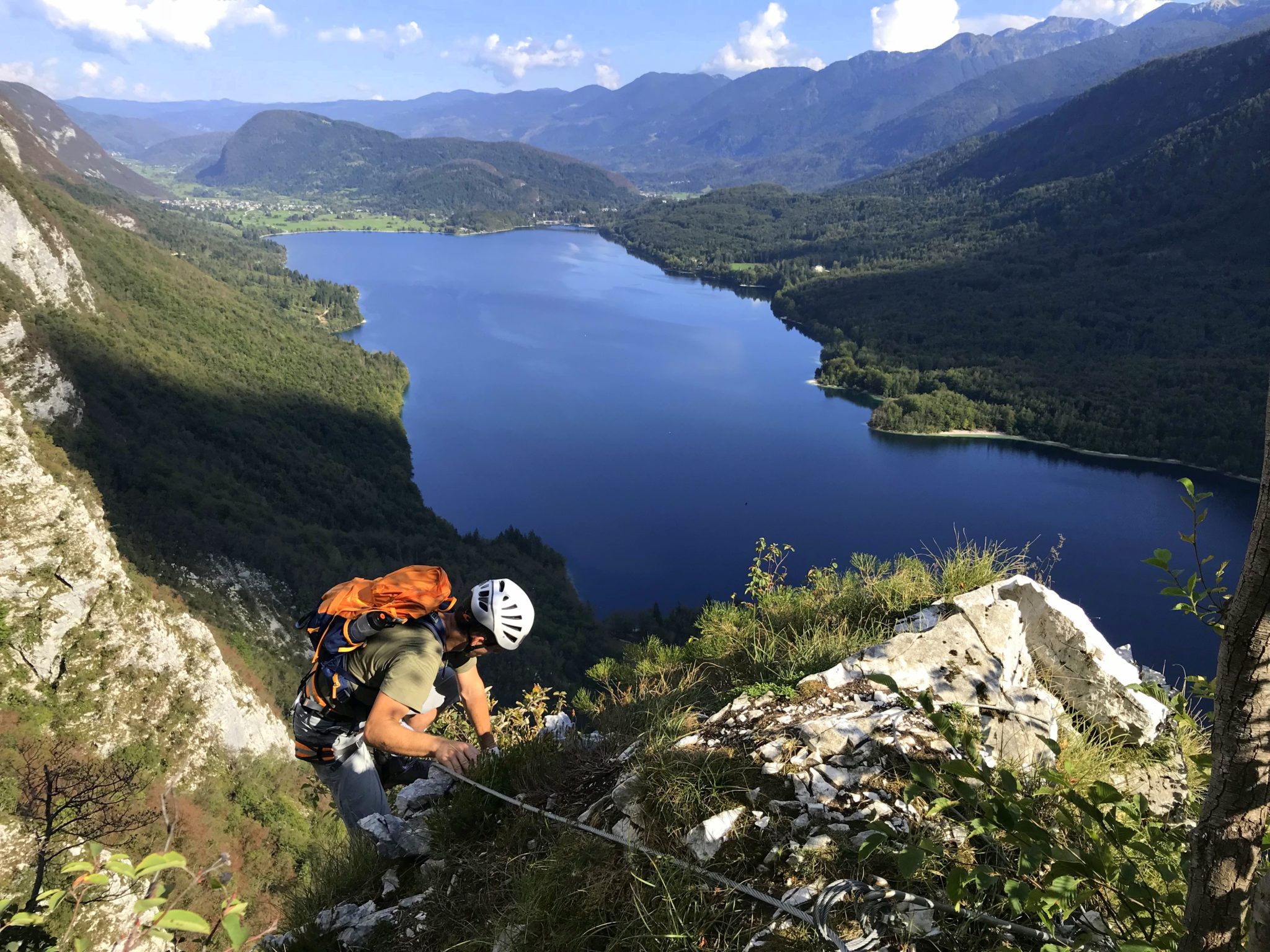