You might also enjoy: Safe winter trails that will blow your mind

Right off the parking lot just outside Mojstrana, nestled at the foothills of the towering mountains of the Julian Alps, the trail starts climbing upwards at relentless speed. The trail itself winds through the forest seemingly innocently but the slopes are legendary for how steep they are – you ask anyone who has climbed the mountain and they’ll nod in agreement! You’ll make a distance of about 7km with a vertical ascent of just under 1.5km. It takes about four hours to reach the top with one mountain hut on the way for refreshments (unfortunately closed for the winter).

If there’s snow on the trail, I suggest you pull out the full-size crampons immediately and keep them on until you reach the very top of the 2,077-meter Vrtaško Sleme as the slopes won’t get any easier with altitude.

My friend Nina and I parked early in the morning – 8 a.m. counts, right? 😅 – and headed off for a good sweat. The avalanches on the trail towards the hut had already gone down and left piles of snow in some spots and many fallen trees lying around not rarely blocking the trail. With a little bit of inventiveness we avoided those and reached the hut in less than 1.5 hours.

The sun was high up without a cloud in sight, the temperatures were nicely warm and the compact snow was calling for us to lie down. We didn’t fall for the old trick though – one can easily get too comfortable in the sunshine and then ends up lying on their butt for hours! With a backdrop of the picturesque mountains, among them the most intriguing Triglav and Macesnovec, which we had hiked back in early November for the golden larches, we entertained ourselves with a quick photo session and then continued further up.

Read also:
Climbing Triglav with kids: possible or better skip it?
Climbing Triglav in the summer on the favored route
The most scenic tour to Triglav
Wandering about the mountains above Lake Bohinj

The snow conditions seemed safe and stable and we diligently climbed 1,200 meters until we reached the first peak, Mt. Vrtaški Vrh. The mountain that inadvertently captured my heart on a sunny March day two years ago (Blog) and where I have been returning regularly ever since. At 1,898 m it has a relatively lowly peak whose height would easily betray its beauty. It happens that it opens up to most heavenly views!

Join us on a Guided Tour to Vrtaški Vrh and Sleme

As per usual we chatted a bit with a local couple who caught up with us at the top and naturally advised us against continuing up to our final goal Vrtaško Sleme. Apparently the snow wasn’t stable enough also due to the unusually high temperatures. Yet, we were armed with quite a few winter experiences too and based on those, the conditions so far felt right, and we decided to give it a shot nonetheless; turning back would always have  remained a viable option if it had turned out the opposite. We headed off.

We soon kissed the sweet descending trail goodbye because the track got steep again fast, but luckily not as much as before. Surrounded by humble white peaks crowned with snow cornices on their ridges and the imposing higher Alps dominating the skyline in the back, the last hour to the top was simply gorgeous. However, a large snow cornice stood right above the exposed trail, making that part a bit risky especially with the warm temperatures. We kept ourselves more to the left, away from where the snow could have slid down if the cornice had broken, and picked up our pace until we reached the top.

You know the feeling when the warm victorious emotions overwhelm you? That was me making those last steps towards the top and then looking around soaking in the cinematic views. The physical efforts I’ve put in, the sweat, the risks I’ve knowingly taken, all that shared with a good friend felt amazingly fulfilling and filled me with a great sense of accomplishment. Yeaaahh!!

Dare I suggest it’s a great time for Slovenian mountains – smaller or bigger – to celebrate the beautiful sunny weather and the approaching spring?! I wish you all great adventures and much fun out there!


Safe winter trails that will blow your mind 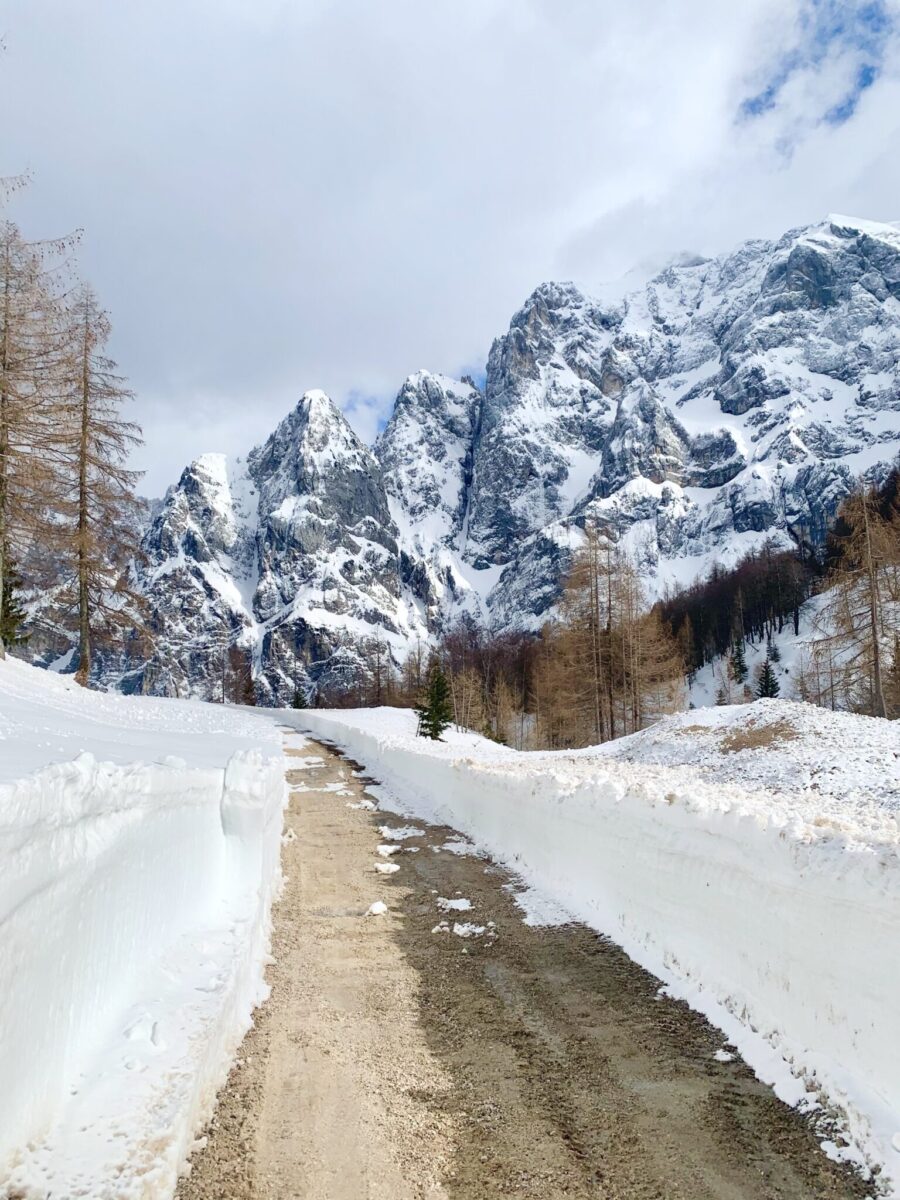