As crocuses, primroses and spring snowflakes awake from the hard soil and the nature in the valleys begins to pick up more vibrant hues of blue and green, the mountains continue to stand firmly their winter ground in the face of the awakening spring. You drive to them in perfect sunshine, but end up climbing in temperatures way below freezing with occasional snow blizzards and fierce wind chills. Yet, the freezing temperatures make the snow stable and awesome for some serious winter ascents, and that’s what counts when you’re slowly battling your way up on the steep snow glazed slopes.

Previous on Blog: The peak on the brink of accessible

The previous weekend was really a turning point for me. From my usual easy-to-moderate winter hikes to the mountains like Vrtaško Sleme and Cipernik, I made a deliberate choice to make a step towards the steeper and higher where full winter gear and past experience are an absolute must. I joined a guided group and upgraded my knowledge about safety in the mountains in winter, while also worked on climbing skills and skills for using the avalanche safety gear. Equipped with proper knowledge, we climbed Mt. Mala Mojstrovka, 2,332 m, an attractive mountain above the Vršič Pass.

Hidden above the lively Alpine village of Kranjska Gora is a mysterious mountain that seems to have shown as many faces as it has had visitors. Namely, due to its comfortable accessibility as it’s located right on the Vršič Pass, it receives a lot of attention and, mostly, it really is a refreshing and a fairly easy Alpine climb. Nevertheless, it should not be taken lightly. The mighty mountain has taken many lives over the years, even a few legendary Alpine mountaineers who were thought to be invincible.

When I was a kid I remember my older cousin getting trapped in an avalanche on the fierce slopes of Mala Mojstrovka and stayed under the snow for over two hours. That happening before the era of mobile phones, his friends rushed down to the valley for help while his chances of survival were rapidly diminishing due to the lack of oxygen and hypothermia. Nevertheless, he lucked out big time and was saved in the end, thanks to a great rescue team and their avalanche rescue dogs.

Read also:
The most scenic tour to Triglav
5 epic hikes and climbs in Triglav National Park that will blow your mind
Climbing Mt. Stol, the iconic postcard mountain behind Bled

The technology has luckily improved a lot during the last two decades and thus ascending up the steep and long slopes felt pretty safe (regardless of the horror stories of the past stuck at the back of my brain…). New to climbing but with safety in the hands (an ice axe, crampons and the avalanche safety gear), I was surprised by how natural it felt. Even the steepest part, where I had all my focus on placing my feet in the right position with the front teeth of the crampons firmly stuck in the snow and the ice axe nicely gripped in, felt exhilarating and inspiring. I was climbing my first couloir!

Having the right gear doesn’t necessarily mean staying safe during the tour. You absolutely have to be able to use it effectively! So if you feel inadequate to use the winter mountaineering gear, I warmly suggest you join a guided tour to Mala Mojstrovka (see other guided Intro Alpine tours)

Somewhere way high up in the Julian Alps we were enjoying our first Alpine adventure; we first ascended the first slope, climbed up a fairly short couloir which exited to a more relaxing terrain but had to climb across a snow cornice to reach it, and then advanced up to the top of Mala Mojstrovka on a moderately steep but pretty exposed slope. Julia, another girl in the group, and I gladly offered to be at the front of the group to make footprints in the fresh snow for the rest of the group, while the guide was busy running up and down making sure that everyone was safe and comfortable.

The weather was changing from perfect sunshine one minute to strong winds and occasional snow blizzard the next, and we reached the top in cold and light snowfall with the mountain tops veiled in thick clouds. We couldn’t have cared less about the obscured views, but celebrated our first big feat in the high mountains!

The descent was mentally more challenging than usually. Again at the head of the group I had to follow visual intermediate goals on an imaginary path to descend down the snowy top and merge with the right trail later on. If the slopes seemed pretty exposed during the ascent, they looked very serious on the way down and demanded 100 percent focus. But when we climbed down the couloir, our coolest guide approved sliding down on our butts, so off we went. Woooohoooo! The most perfect ending to the most perfect first climb in the high mountains!

That evening, resting on the couch, my body felt pleased with the workout but my mind was restless. That climb was just so overwhelming that I had to return to the mountains as soon as possible! After a few messages, my usual hiking buddy Nina was up for it and so we agreed to meet the next morning and try the easiest winter climb to Mt. Begunjščica, a 2,060-meter peak in the Karavanke Mountain Range.

Continue to: The climbing adventure in Mt. Begunjščica


The peak on the brink of the accessible 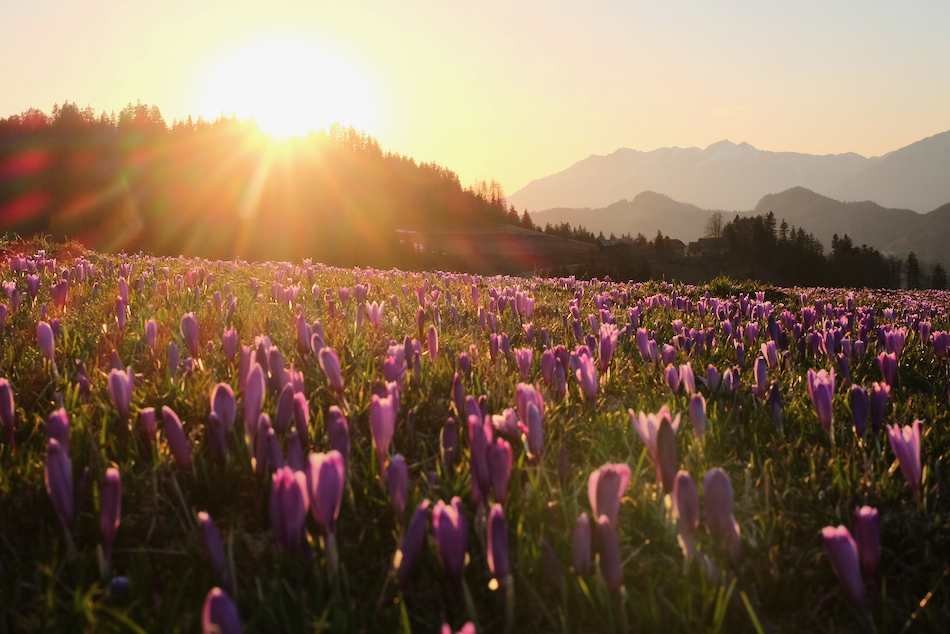