When everything becomes still, the streets empty, the noises die down, the silence becomes overwhelming and I can finally hear it. The winter is here. First snowflakes lightly fill the air and the world turns calm and beautiful. Our hearts fill with joy and our minds with fantasies about our favorite corners of the world turning white. We go to bed in one kind of world and wake up in another quite different.

This year the winter has been almost too generous with snow! It practically started to snow in October and hasn’t stopped ever since. High mountains haven’t seen so much snow in years – Kredarica at 2,513 m had 495 cm of snow at the beginning of February! Just to compare it to the record year 2001 when the highest layer of snow measured was 700 cm, and yet we still have a couple of cold months more to go.

In this snowy spirit, here are two great destinations in the mountains that are absolutely gorgeous in winter time and safe to enjoy too.

Read also:
Three spots to see blooms in early spring
Colors of the fall above Bohinj: Pokljuka, Triglav Lakes, Vogel
Chasing the sun and views in the Karawanks

On one of those seemingly eerie grey days when fog hung in the air and a thick silence wound through the trees, I started my usual free Saturday trail solo to clear my head from the tough week. I was exhausted by the work on my house, which my parents built 30 years ago and needed a good remodelling. We had torn down the inner walls and built the new ones, changed electrical and water installations, changed the flooring, windows and doors. We also changed the roof and installed the solar panels, while also kicked out all old furniture and replaced it with new pieces. Everything happened in just a matter of months and my head was buzzing with all the past works and some more still pending. One thing was clear – it was time to unwind!

The start of the trail was pretty dull with grey weather and many people, but whatever life offered at that moment I grabbed it with both hands. With altitude and more snow, the number of people decreased, until I left everyone behind passing the popular Kališče Hut at 1,534 m. On a normal weekday the hut would have been a great and empty hiking destination with almost 1,000 m of ascent and pretty views from the terrace, but on a forecasted sunny Saturday it was swarming with hikers. While I love to exchange a couple of words with fellow hikers, with whom we usually share that positive mountain energy, I needed my dose of silence first.

The fog lingered now a hundred meters below us with the warm sun high above. The initial sweat-it-off hike leveled up quite a bit and it now resembled more a postcard picture of a breathtaking winter fairytale! It was time to even take off the top layers – it was pretty warm! The sun had already softened the snow in spots so I had to pass those patches carefully otherwise I would have broken through the top layer and my feet could have got stuck in the top branches of the mountain pines. Definitely not something I was looking for.

The trail from the Kališče Hut onwards soon split into two, one leading towards the serious winter climb Mt. Storžič, 2,132 m, and the other taking to a more relaxed ascent to the 1,744-m peak Bašeljski Vrh. I followed the footsteps of the latter.

The landscape resembled one from the far north, like Finland in the heart of winter. Everything was the purest shade of white. The crazy amounts of snow lay on top of mountain pines and only the taller trees stuck out, all dressed in white. The mountain tops were frozen in a snowy crust, only the slopes at lower elevations started to shed the snow with avalanches.

I shared the top with a couple of cunning Alpine choughs excited top see a person, or better put, to see a person with food. They immediately started to circle above me, but their interest was pretty obvious – the circling stopped the minute I finished my sandwiches. After soaking in the beautiful panorama of the sunny Alps, I hurried down to the valley with a ten – minute stop at the hut to catch up with the lively debate on the terrace. Always good to learn the local gossip! 😎

It was a day before the New Year’s Eve and the mountains were buried under fresh snow. Chances were good I would find a winter fairytale outside, nevertheless, there was a trick. Right on first days after a big snowfall you always need to be the most careful. The new layers of snow are not compact enough and not stuck well to the previous layers of snow yet which can easily trigger an avalanche. The red alarms were on in the high mountains with the avalanche alert at level 4 on the scale from 0 to 5, and my topmost priority was to choose a trail that was safe but would also provide a good sweat.

I opted for the Roblek Hut underneath the peak of Mt. Begunjščica. With almost a thousand-meter ascent and the trail winding up in the forest, it’s always a great choice and is considered a safe one in winter conditions as well.

The hut is situated at 1,657 m about an hour to the top of 2,060-m Mt. Begunjščica, one of the most prominent peaks in the Karavanke mountain range (and beautifully seen from Bled!). Most of the trail goes through the forest where the fir trees visibly change from very tall to shorter and shorter ones combined with mountain pines at the top.

The sun was warm and, truthfully, during the first half of the hike quite annoying as it was melting the fresh snow on the trees which was then falling off directly on to me and my puzzled dog. However, her expression after getting a pile of snow on herself was priceless, mine not so much… When we reached the meadow Planinca, my clothes were all wet, but I decided to continue further up nonetheless in the hope the cooler temperatures higher up would keep the snow nicely stable on the trees instead of on my head. I was right. With elevation the hike was becoming more welcoming and prettier too. The forest was completely white, there were literally meters of snow and the trees had a thick white coat of snow on them. Stunningly beautiful!

Check out Exploring Slovenia’s From Bohinj to Soča Valley Trek

Honestly, it was so nice I had to return two more times on the following days. If it was only for the so damn beautiful scenery, I probably wouldn’t have, but those vibes at the top, woooow! I fell in love with the hut and the people there! Everyone was relaxed and incredibly open, we were cheering at the vibrant sunset and dancing to the lively tunes of the folklore music (which only makes sense in a situation like this… right?). I’ve never felt I belonged somewhere so instantaneously and so strongly before like I did just then by that hut. Returning there for sure!

Read also:
Five epic hikes and climbs in Triglav National Park that will blow your mind
Climbing Triglav with kids: possible or better to skip it?

Do you have a favorite winter escape trail? Can you relate to hitting it off with random hikers too? Share in the comments!


Merry Christmas and a Happy New Year to all of You 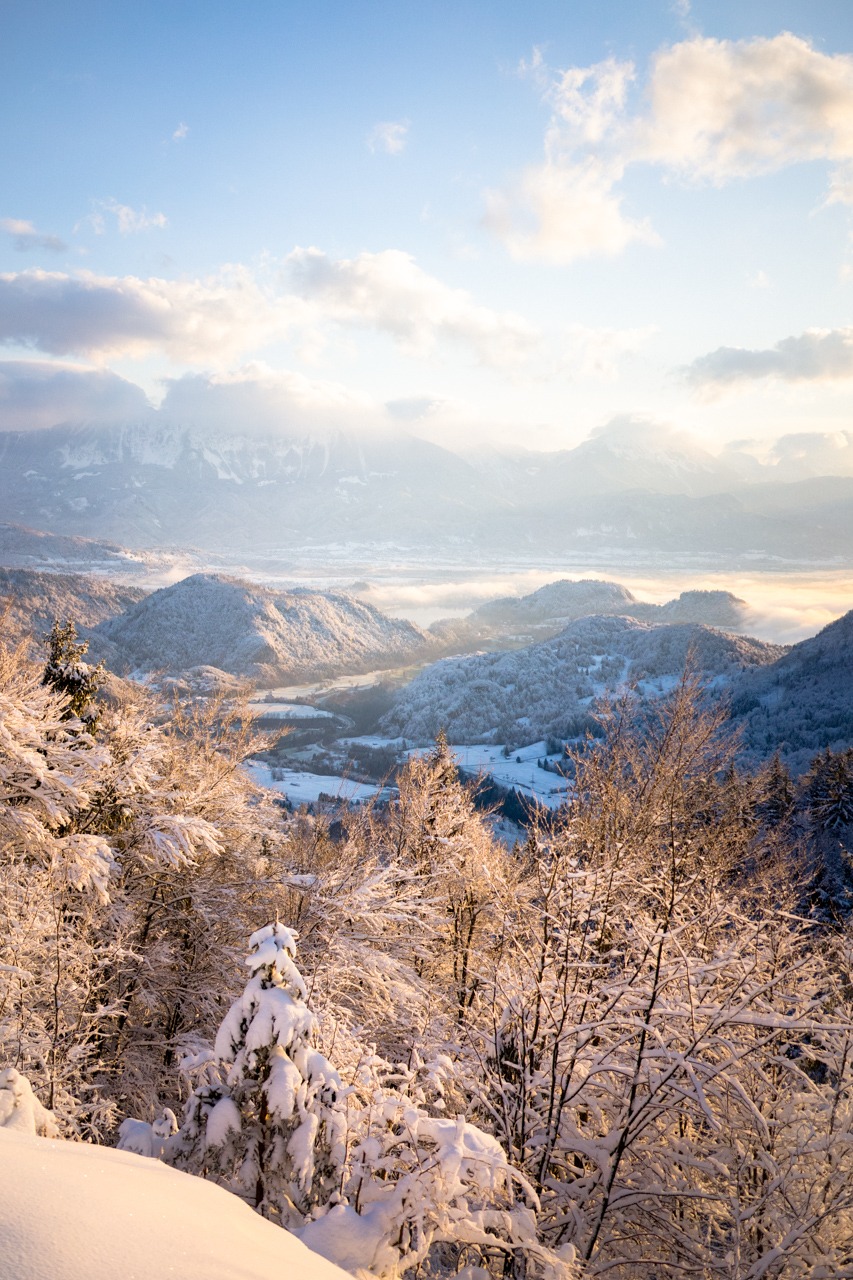 
The peak on the brink of the accessible