Hidden in southwestern Pokljuka, a high karst plateau in the Julian Alps with 6,300 ha of mostly fir forests, are numerous Alpine pastures with old wooden huts that seem lost in time. Some of them have been changed into tourist homes, while others are kept simple by the new generations of the old shepherd families. In summer, hikers can make a stop to taste delicious home-made cheeses, sour milk and sometimes local cured meats and štruklji – a welcome relief on their wanderings along the long trails of Pokljuka.

In winter, however, there is a sense of contented isolation. As often as not, from late-autumn until mid-spring the pastures, especially the higher ones, are uninhabited and inaccessible by car, and can only be reached on skis or showshoes. Set against a playground of high peaks of the Julians Alps and yet so snugly hidden in the otherwise thick forest, Pokljuka’s Alpine pastures offer perfect winter hiking goals with breathtaking views of the winter wonderland.

In this snowy spirit, here is a great 18-km loop hike in the Triglav National Park among Alpine pastures of Pokljuka that is absolutely gorgeous in wintertime and safe to enjoy too.

As many great treks in the Julian Alps, among them also the most scenic tour to Triglav, this one too starts from Rudno Polje, a sports center at 1,350 m mostly focused on Nordic skiing and biathlon. About an hour into the trek through the tall fir forest I left the main trail towards Triglav and followed the sign for dairy goodies pointing downwards towards the untouched snow with no marked trail in sight. I followed my hunch (compared with the tracking app) and soon spotted the first little hut in the distance.

Safe winter trails that will blow your mind
Visoki Mavrinc, a gorgeous and safe peak above Kranjska Gora
Hiking safety in high mountains

The closer I came, the more beautiful it turned and soon I was faced with around a dozen little huts scattered along a kilometer-long clearing surrounded by tall mountains. On the western side, the Sleme ridge stretched from south to north and ended with its highest peak Ablanca at 2,005 m. Like an amphitheater of peaks, they continued from north-west to north – Veliki and Mali Draški Vrh, 2,240 m and 2,132 m, and Viševnik, 2,050 m; while the rocky walls of the Plesišče peak, 1,790 m, a rather modest peak on the classic way to Viševnik, towered above the eastern side of the pasture.

No signs of other people showed in the fresh pristine snow, just occasional footprints of deer, chamois and hare implied that life indeed does reach this pasture even after a big snowfall. I sat down on my backpack, listening to a small stream trickling down its way from the snowy mountains towards the valley. The pasture looked so idyllic, remote and wild when covered with a thick blanket of snow. The complete opposite of the summer when it’s usually bursting with life.

Eventually, the sun began to sink behind the Sleme ridge and the cold of the shade sent me forward to the next goal, the Uskovnica Alpine village.

The trail from Planina Konjščica to Uskovnica followed the Ribnica stream, weaving through a fluffy white landscape between snow-capped rocks and white fir trees. The Ribnica is actually one of the rare few permanent water streams in the Pokljuka area. Not because there wouldn’t be much rainfall, on the contrary, the average annual rainfall here is actually between 1,300 – 1,900 mm with the foothills of Mt. Debela Peč reaching as much as 3,000 mm! The reason lies in the underground system of long cracks, caves and rivers in this karst high plateau which swallows the water to then feed the Bohinj and Upper Sava Valleys.

I crossed the Ribnica stream one more time – this time on a wooden bridge across a gorge carved by the water. Shortly after, I reached a small village spread across a remote hummock-strewn clearing. First mentioned in the 15th century, Uskovnica used to be a place for dairy farming in summer. In the 19th century it also became a resting point on the way to Triglav, while in the 20th century Alpine tourism started to develop, which continues even today.

As much as it was beautiful, I didn’t dally long before heading towards my last hiking destination of the day, the Zajamniki pasture. I only had an hour until the sunset and photographing the Zajamniki Pasture for sunset with fresh snow had been my wish for quite some time.

Bled’s must-go outdoor spots
Hiking in Slovenia: the gear you will need

Much smaller than Uskovnica, it’s one of the most romantic Alpine meadows I’ve ever seen. Surrounded by forests, about sixty huts lie stretched across this high-altitude pasture with a backdrop of mountain peaks of the Julian Alps to the west and the beautiful Bohinj mountains to the south.

I found the last golden larch tree at the southern tip of the pasture and looked through its glowing branches as the sun slowly sank behind the horizon. The snowy slopes lost its spark for a moment and it seemed like everything came to a standstill. Some ten minutes later the clouds suddenly exploded in pink and orange, reflecting its wonderful colors onto the pasture and the mountains around.

Explore Alpine pastures of Pokljuka with us

How I got back to the car you ask? In other words, another 6 km and 230 m of ascent on top of the previous 12 km and 420 m of ascent in fresh snow. But now at night. Luckily, half of the hike back followed more or less an open terrain, nicely lit by the full moon. The other half was spent talking to my dog, thinking of the famous Pokljuka wolves, and comforting myself that it was actually better to simply enjoy the hike blissfully ignorant, seeing only the couple ten meters within the head torch range. Against all odds, I survived.

All joking aside, I actually loved every second of the hike and wouldn’t have done it in any other way!


Adventuring in the Julian Alps 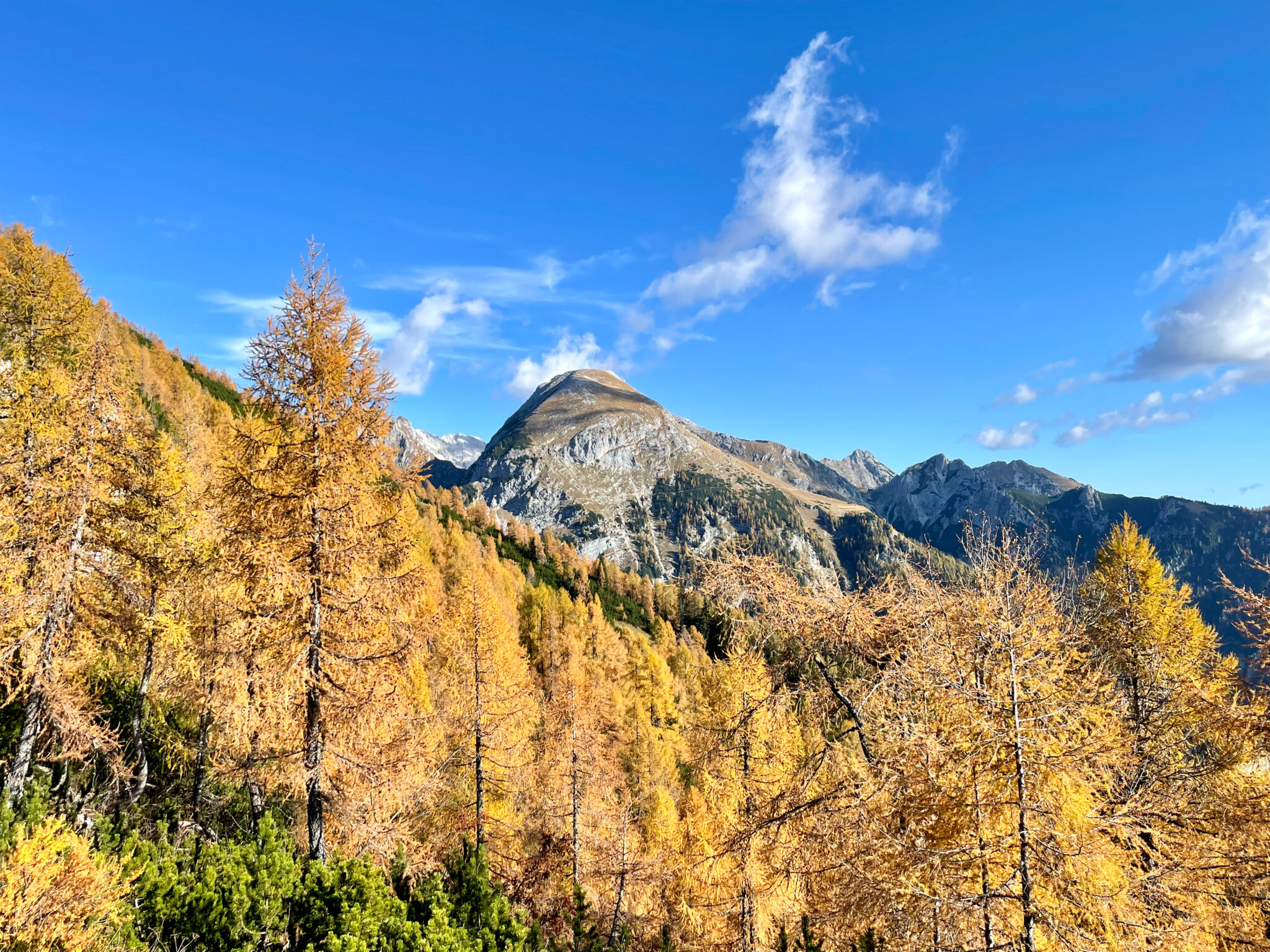 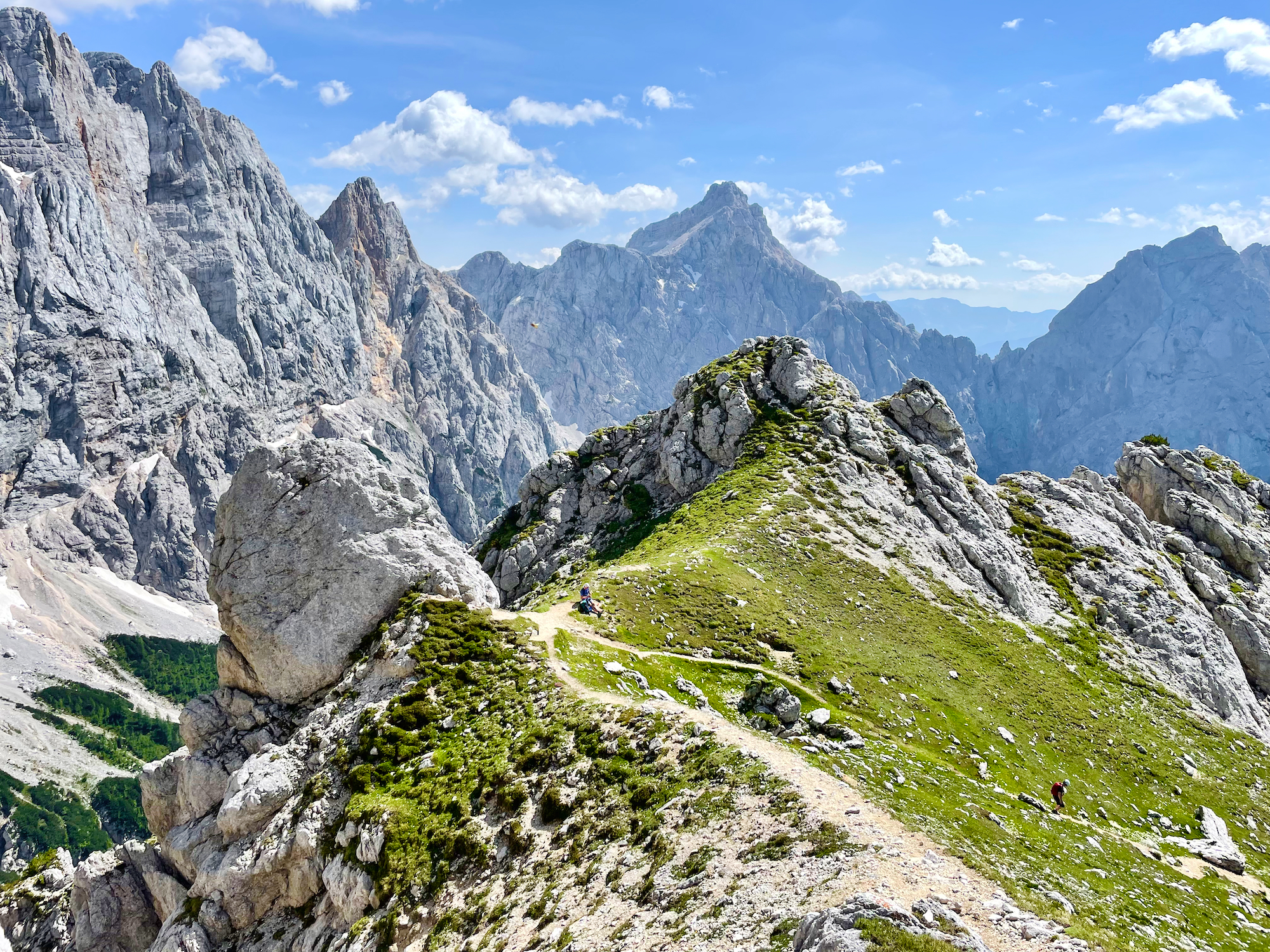