As much as I love snow and a white fairytale-like landscape, there’s still that tiny corner of my heart that misses the carefree summer adventures in the mountains. The kind that comes along with a relatively small backpack and less planning. Then autumn rolls around, and the mountain huts close down for the season, the cold sets in and the daylight shortens. The mountains empty and the trails, which had been very lively even a few weeks before, quiet down, and the silence is merely interrupted by an occasional whistle of a chamois and marmot. Nevertheless, autumn brings a different kind of magic.

Important note: always check current conditions in the mountains and adjust your hike or climb accordingly!

A hike to Vršič Pass

More than a hundred years ago between 10,000 and 12,000 Russian war prisoners built the highest road in Slovenia across the Vršič Mountain Pass that connects the Upper Sava and Soča Valleys. The road of strategic importance served as the primary channel to bring weapons and food to the soldiers in the Soča Valley fighting on the Soča Front (Slo. Soška fronta) during WWI. Its construction didn’t go without casualties as many Russian war prisoners died from diseases, malnutrition, and avalanches. Namely, as many as 300 Russians died in only a couple of avalanches, and the well-known Russian chapel you see on the way to Vršič is actually devoted to them.

Packed with history, this trail doesn’t only carry a story but it’s also as beautiful as they come.

You can start the hike just outside Kranjska Gora and first visit Zelenci, the spring of the Sava Dolinka River, which after it merges with the Sava Bohinjka forms the great Sava River. From Zelenci you can continue to Kranjska Gora, then Lake Jasna, and from there on follow the Alpe Adria Trail towards the beautiful Krnica Valley and finally to the Vršič Pass.

You might also enjoy:
Our favored one-day round tour to the Triglav Lakes
Climbing Triglav with kids: possible or better to skip it?
Beginner winter climb in the Slovenian Alps: Mala Mojstrovka

The Hanzova via ferrata to Mala Mojstrovka

Named after its constructor Ivan Vertelj – Hanza, this via ferrata to one of the most intriguing mountains above Kranjska Gora was built in 1928 to serve as a direct route to Mala Mojstrovka from the Yugoslavian (officially called the Kingdom of Serbs, Croats and Slovenes) side of the Rapallo border at the time. A quick note of history: during the years from 1920 to 1947 the western part of Slovenia among others was annexed to the Kingdom of Italy with the Treaty of Rapallo, and thus the Vršič Pass was just on the border between the two kingdoms.

If the weather permits and the rock is dry, you’re up for some exclusive climbing in the midst of a breathtaking panorama. This via ferrata to the top of Mala Mojstrovka, 2,332 m, is nicely secured throughout with a cable, the approach from the Vršič Pass is easy and relatively quick (45 minutes), and the descent goes down the much easier southern route.

Important note: do not attempt the climb without adequate knowledge, skills and gear!

A picturesque mountain that’s just opposite Mala Mojstrovka, Slemenova Špica, 1,911 m, is perfect for families and those who wish to enjoy an easy hike in a gorgeous setting. This grassy peak lies lonely underneath towering limestone massifs of the Mojstrovka Mountain group, to which only climbing routes lead from that side, and which gives an impression of being the last comfortable resort in the otherwise tough Alpine world.

In October, the larch forest along the trail colors golden, turning the place absolutely unbeatable with vivid colors so surreal that it’s hard to imagine it exists outside of a fairy tale.

The easiest way to reach Slemenova Špica is from the Vršič Pass, from where you can make a nice round tour to the top. If there’s at least a thread of adventure in you, dare I suggest you hike up on the trail underneath the walls of the Mojstrovka group and down the classic trail more to the north.

A hike to Kriški Podi

Welcome to a high-Alpine plateau set underneath prominent 2.5K peaks. Named after the 2,410-m-tall mountain Križ above it, the Kriški Podi plateau is home to countless marmots, chamois and Alpine ibexes.

This steep but scenic hike lets you soak up breathtaking views of the highest mountain of Slovenia, Mt. Triglav, and its 3-km wide and 1-km tall Triglav North Face. With sheer rock walls towering all around you and the land so bountiful with wild animals, it feels like being in the middle of remote mountains, yet a comfortable mountain hut (open June – August) makes you feel at home.

The most easily accessible trail from Kranjska Gora goes from the Vrata Valley, where you can drive to and start the hike at the Aljaž Hut. A nice 20-minute walk from the hut, you’ll see the sign for the Pogačnikov Dom. You can kiss that sweet flat trail behind because the track gets steep fast afterwards. The steel cable secures only a couple of more exposed sections on the otherwise technically easy trail, yet the whole trail climbs up about 1,200 meters, so make sure you have allocated enough time, water and snacks for the ascent.

Join us on a guided tour to Razor, a stunning peak above Kriški Podi

A hike on the ridge Debela Peč – Mrežce

This hike is simple, not too easy but also not too hard, and at 2,000 meters, the top is still cozily covered with soft grass. There you can lie down and enjoy spectacular views of Triglav and other peaks of the Julian Alps to the west, the Karavanke Alps to the north stretching towards the northeast, and the Krma Valley nestled between you and Triglav.

I’m actually not talking about just one peak but a few peaks dotted along a beautiful ridge. You can start with Debela Peč, a broad 2,014-m peak on the far right once you reach the Blejska koča Hut, and then slowly make your way to the left following the ridge over to Brda, 2,008 m, Lipanski Vrh, 1,974 m, and finally Mrežce, 1,965 m. You can continue further on to Debeli Vrh, 1,962 m, and then return back down through a beautiful larch forest, which is actually what we offer in one of our tours above Pokljuka. Or you could even hike all the way to Viševnik and Mali Draški Vrh, but let’s leave the last one to the most avid of hikers.

While a few of the peaks might be fairly popular with the locals and you can expect quite a few visitors on a sunny weekend, on weekdays, however, the trails empty and the air instead gets filled with the whistling sounds of sturdy chamois.

Moody… but it also feels good to walk through a


Climbing Triglav with kids: possible or better to skip it? 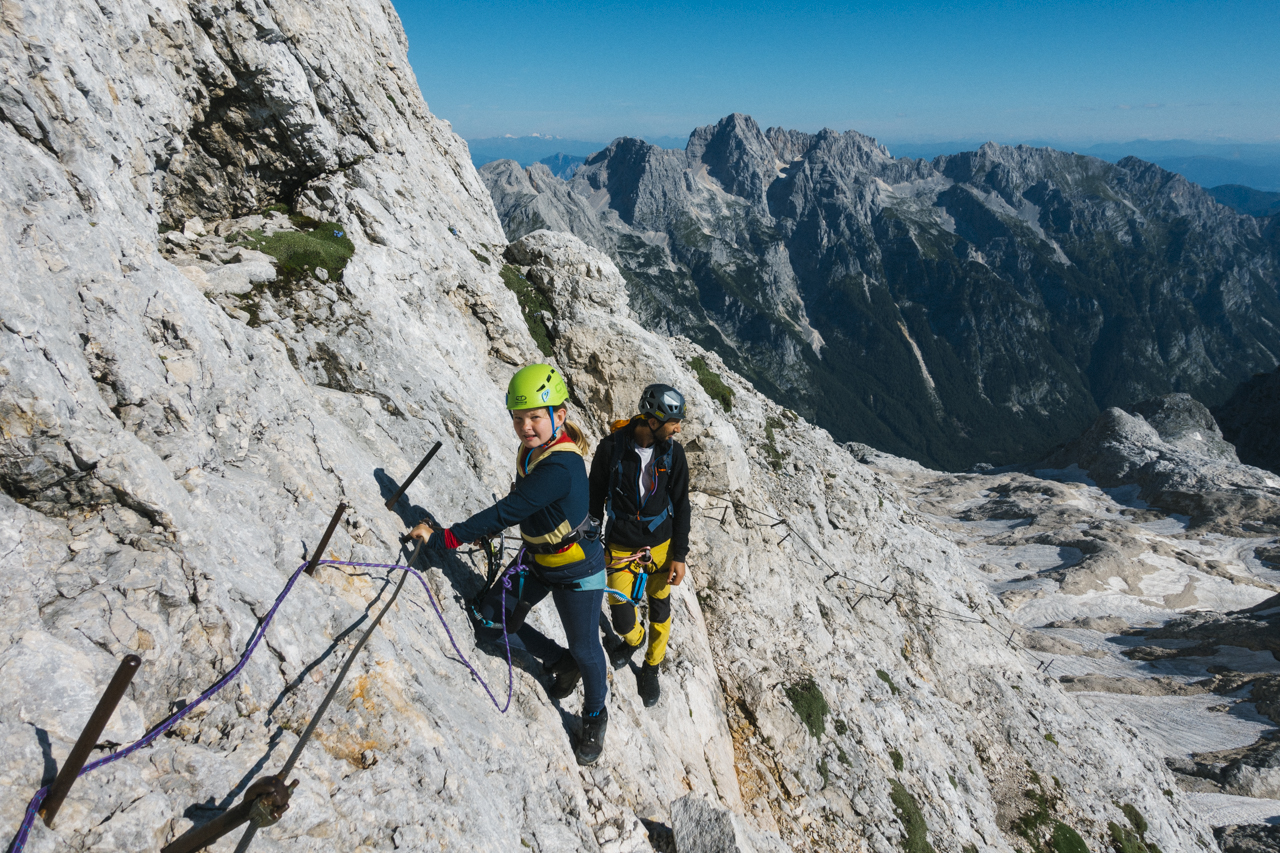 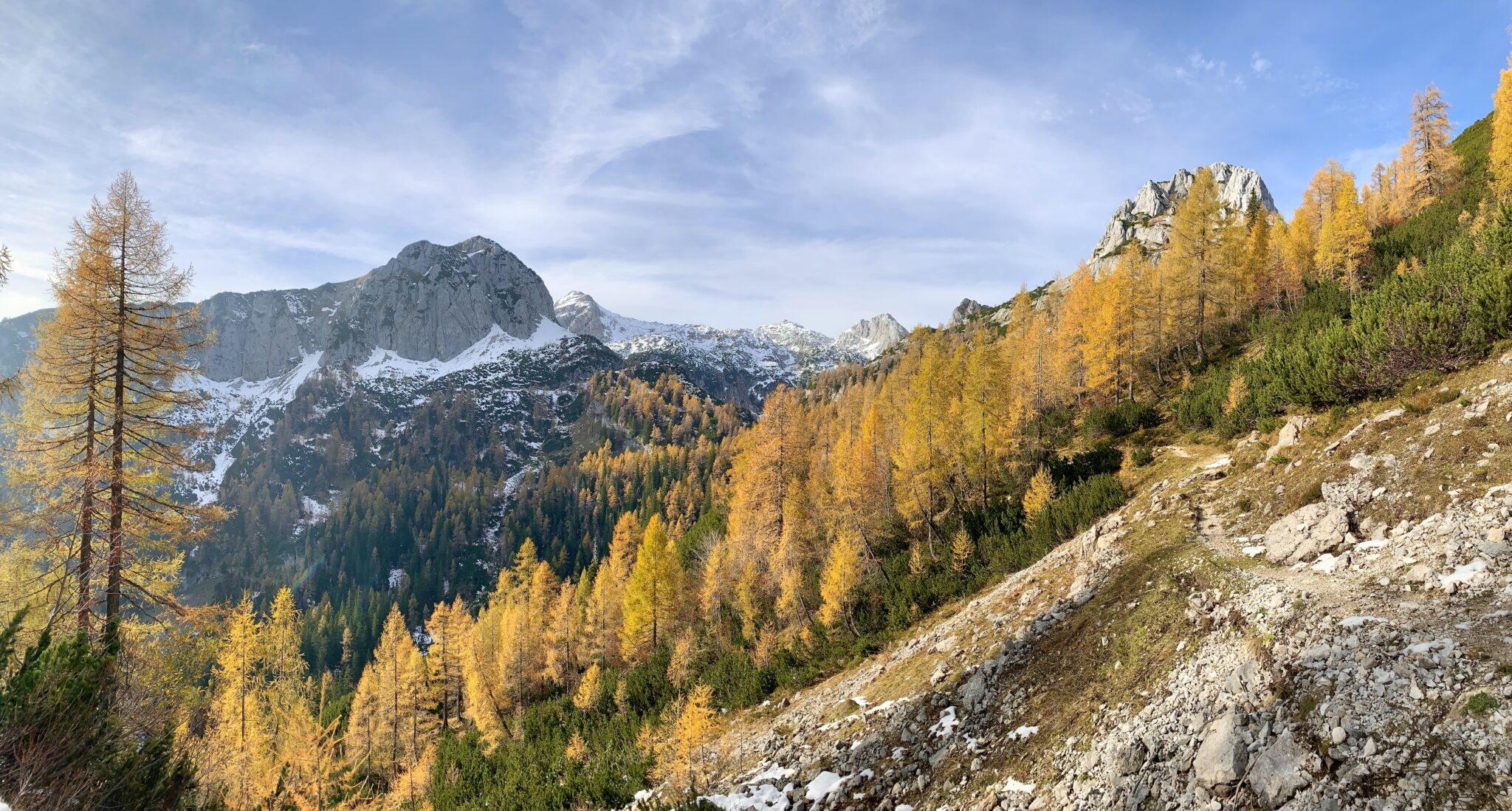