You may also be interested in:
Colors of the fall above Lake Bohinj: Pokljuka, Triglav Lakes, Vogel
A glimpse of WWI on a stunning traverse from Bohinj to the Soča

Things didn’t look good for the people living in the Bohinj Valley back in the olden days. The closed up valley, surrounded by tall craggy mountains, used to be considered a remote world of its own and its people hardly to be able to thrive in the harsh living conditions. The word “Bohinjec”, which stands for a person living in the Bohinj area, is not only defined in a strictly geographical sense but more in the people’s sturdy mindset. Even nowadays, when the valley is well connected with fast roads and we can hardly say that the people could have a reason to feel deprived in a materialistic sense, one can notice a difference in character.

Defined by the towering mountains, these have taught the locals how to cohabit with vertical walls, extreme weather like severe winters, raging thunderstorms, fog and persistent rain, while also other natural phenomena like avalanches, erosion and flooding rivers. The rain has its young in Bohinj according to a Slovenian saying and we can easily nod in agreement seeing the numbers of an average annual precipitation. In fact, the Julian Alps, where the Bohinj Valley is located, receive more than 3,200 mm of precipitation per year, which qualifies them as one of the wettest Alps in Europe!

Its bare remoteness might have moulded its people in unique ways but it has also protected them from certain dangers that threatened the rest of the country. In the 15th and 16th centuries the Turks were pushing hard to invade the country, killing or enslaving as many as 200,000 people and causing a huge damage to the economy. They also tried to break through to the Bohinj Valley but gave up due to the sheer inaccessibility of the mountainous terrain a few kilometers further up from Bled. The village where the Turks turned around is even nowadays called “Obrne”, meaning the point of turning around.

It comes as no surprise that Mt. Triglav, the highest mountain of Slovenia, was first conquered by four brave men from the Bohinj area in 1778. They continued the work of Baltazar Hacquet, a doctor and botanist who had made an attempt a year earlier but failed to reach the top. The four hearty men as they are usually referred to nowadays needed three days to conquer Triglav; on the first day they ascended up to Velo Polje, where the Vodnik Hut was erected almost a hundred years later, on the second day they made it to the foothills of the very peak of Triglav searching for a possible way up, and on the third day they climbed to the top up the “green avalanche”, the Triglav glacier that used to measure 15 ha back in their days.

Fast forward to today, many things have changed; the glacier has notably shrunk to a mere 1.5 ha with a volume about 300 times smaller than in the 18th century, while a network of well established trails have been set for anyone wanting to climb Mt.Triglav. Many hikers use almost the same trail as did the four hearty men in 1778, however, the time frame had changed a bit during the past centuries. Today, trail runners can reach the top of the highest mountain and return home by lunch, while those taking an easier but steady pace can make it up and down the mountain in one day. Nevertheless, our generations will never know the thrills of a true adventure searching for the passes in a maze of shrubs, rocks and ice as did the first-timers.

Read also:
Twelve mountain adventures in Slovenia you will likely fall in love with
The most scenic tour to Triglav

Many trails have been set and marked also in the closer vicinity of Lake Bohinj to facilitate a better sense of direction in the mountains for people who haven’t been brought up around that area. One of those luring peaks above the lake, of which a mere glance at its rocky south face plunging steep down toward the lake can easily spark a desire to  climb it, is Mt. Pršivec. I can only imagine that the name derives from the powdery snow sprinkling down from the steep slopes of its peak even weeks after a snowfall.

I had been eyeing Mt. Pršivec and its imposing vertical wall hugging the southern rim of Lake Bohinj for years. It happens that I climbed a via ferrata in the lower walls of those mountains a few years ago and was so charmed that I not only wrote a blog about it (A surreal via ferrata above Lake Bohinj) but also added the climb onto Exploring Slovenia’s via ferrata offers. Back then it had been just freshly introduced to the climbing public and still considered one of the best kept secrets around Lake Bohinj and a hell of a climb. What I didn’t know at the time, however, was that the via ferrata climb could have easily continued further up, finishing almost at the top of Mt. Pršivec.

A few weeks ago, however, I finally decided to give Pršivec a try on a supposedly easy trail from Stara Fužina, a small settlement on the northeastern side of the lake. I was looking at 1,161 meters of ascent on a 15-km tour – a climb decent enough to keep me entertained for 6-7 hours.

I followed the trail, sweating on the steep parts and whistling a happy tune (luckily I was alone on the trail!) along the flatter bits. Did I mention enjoying snacks while soaking up the views of snow- covered peaks across the glistening Lake Bohinj? Fed by pristine mountain streams, its deep blue color glowed among high mountains and green fir forests in the warm winter sun.

Happy to be outdoors, I continued in the direction of the Pršivec peak until… until I could not anymore. The easy trail suddenly gained a serious degree of inclination which in a combination with the ice made the further progress too dangerous. All the footprints in the snow ended there and it seemed that I reached the point of return. Bummer! I knew that the top part would be steeper than the rest but I surely didn’t expect such a turnabout!

Stubborn as I was, I tried climbing the thing without an ice axe in a couple of spots that looked easier at first sight but then always ended turning around. Feeling defeated, I found a sunny view spot to lick my wounded ego. I looked at the towering peak knowing I would be back.

Two weeks later, equipped with an ice axe and crampons, I returned with a friend. The marked trail still looked too exposed as one slip could lead to a possible 30-meter fall, therefore we decided to look for an alternative choose-our-own adventure up to the top. A few failed attempts, but we finally found it! We first climbed up large rocks well cushioned with powdery snow and then ascended up a steep snowy terrain across another set of rocks over to an open plateau. A pretty bold climb which I would never dare to do alone!

The plateau opened up to heavenly views and the late afternoon sun cast glorious light on the ridgetops towering over Lake Bohinj to the south-east and Mt.Triglav to the north. Instead of rushing up to the very top, we rather followed the last beams of sunshine, sitting down on a sunlit perch right at the top of the cliffs and marvelled at the sight.

Yep, it was worth it.


Visoki Mavrinc, a gorgeous and safe peak above Kranjska Gora 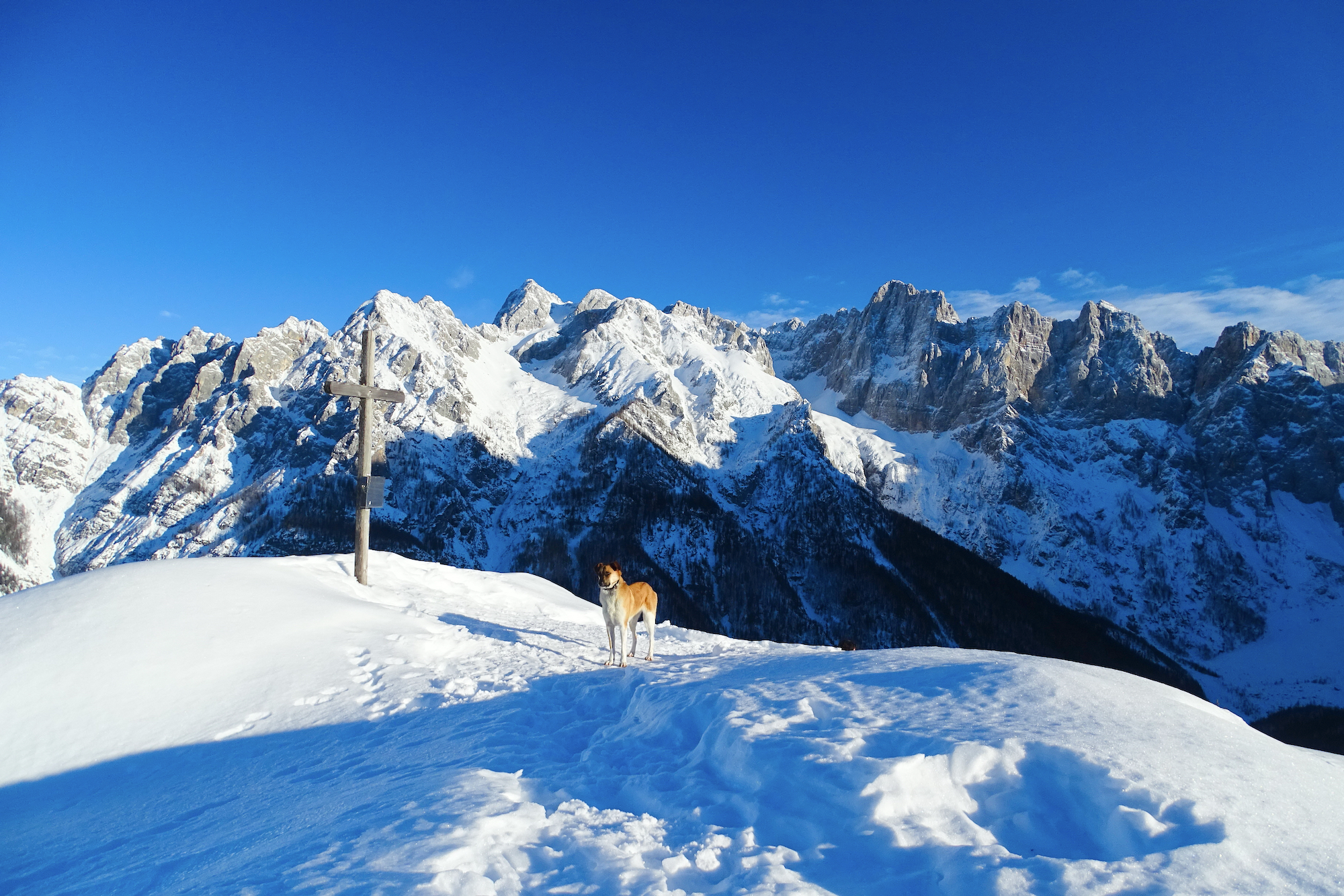 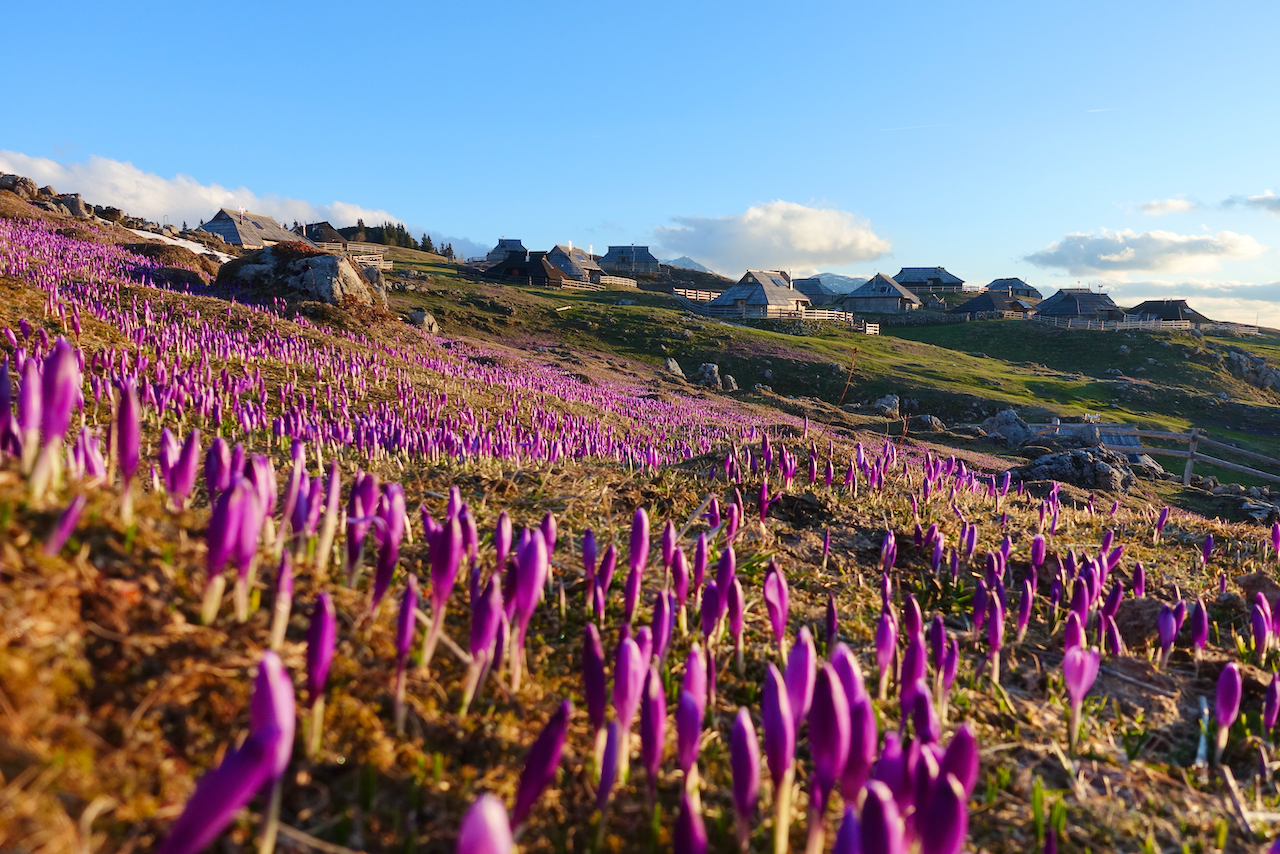