As we drive close to the Kamnik-Savinja Alps, heavy raindrops slowly dwindle and thick black clouds tear apart offering a peek of the mountains. Velika Planina, a high Alpine plateau on the Alps’ southern rim just 30 kilometers from Ljubljana, had just started to show some greenish hues in its vast brown fields after a long winter, yet in less than two months cows from the neighboring villages will be already grazing in those highland pastures. In April, however, as the snow melts away, Velika Planina is well-known for something else. Carpets of purple crocuses break out every year, turning Velika Planina into a blooming place straight out of a fairy tale!

We had booked a wooden hut with Alpine Resorts and were exhilarated to spend the next three days in the mountains. Although it didn’t seem like it, the timing couldn’t be more perfect. Three weeks before the fields were still under snow, then the warm spring sun finally arrived melting it quickly. Not even a week later a big snowfall covered Planina with yet another half a meter. At this point I had given up all hopes of seeing crocuses! Instead, out of serendipity, the temperatures rose above 20 degrees a week before our departure and the first photos of crocuses started to appear on Instagram just as we were packing! (hey, check out Exploring Slovenia’s Instagram account!)

We drove to the highest parking lot, Mačkin Kot, put on heavy backpacks loaded with water, food and clothes for three days, and headed towards our hut. The mists were dancing in the wind and dark clouds occasionally sprinkled the land with fluffy snowflakes. Closed up, protected from the cold, the crocuses adorned the fields, humbly adding some color to an otherwise gray day.

Along the way I thought of our ancestors and the endless effort they put into moving the cows from lower in the valley to the high Alpine meadows. Once up there, they needed to protect them from wild animals such as bears and wolves, supply water, which was a difficult task in this karst limestone land where the rain usually sips right through the earth into the underground, and provide the basic comfort for themselves. Locals, after all, have been using these highland pastures and their nutritious grass for thousands of years. Archeological evidence shows signs of humans, most probably herdsmen, on Velika Planina as early as the prehistoric times!

The common practice nowadays is to hire a specific shepherd and milkman for all the cows of the area, on Velika Planina instead each shepherd still manages their own cows and prepares their own dairy products. Therefore, every summer, from June to September, shepherds from the surrounding villages return to their mountain homes to lead a simple life taking their herds to a pasture every morning and preparing dairy products for the rest of the day.

While there are actually three settlements on Velika Planina – Gojška Planina, Mala Planina and Velika Planina, the area got its name after the biggest and most developed one. The shepherds’ settlement of Velika Planina consists of 64 enchanting oval wooden huts, which have kept a unique Alpine architecture following a complete reconstruction after the whole settlement burnt to the ground in WWII. Every hut also has a wooden fence, inside which the cows rest when they’re not out grazing. There are a few ponds for the animals along the pastures and one well for the shepherds. Back in the days during the dry periods when water was scarce, the shepherds had to climb into the colder Veternica Cave nearby, known for keeping the snow even in the hottest summer months, and collect enough snow for water for the animals and themselves.

Snowflakes gathered lightly on our jackets as we marveled at the old shepherds’ settlement and the dense patches of crocuses all wrapped up and looking small. The cold slowly crept up making us pick up our pace to the newer part of Velika Planina with wooden huts mostly intended for visitors like ourselves. We finally reached our cozy little hut named Koča Tisa: our home for the next three days with two bedrooms, a kitchen, bathroom and a dining room with a couch and TV. On top of everything this place also had a sauna and an outdoor jacuzzi! We lit the fireplace and enjoyed a good home-cooked dinner as the dance of tiny snowflakes continued outside the windows.

The following morning we woke up to a surprisingly sunny day. The sun lured us all outside and soon my son and I were both absorbed into delicate looking crocuses in front of the house, which opened up to the warmth of the new day.

It’s easy to forget which century you’re in when you stroll through these open meadows, the purple wild flowers shimmering in the morning breeze and traditional wooden huts scattered along the trail. After a loop hike to the top of Velika Planina at 1,666 m and its pastures, we watched as the eerie clouds, which had formed around the highest peaks of the Kamnik-Savinja Alps, started approaching us fast with the growing wind. A snowstorm sent us back into the hut, where we lit the fireplace, prepared the sauna and jacuzzi, and enjoyed the rest of the afternoon cozily inside. (A hint for the wise: the nearby restaurant Zeleni Rob also prepares take-aways which you can eat in the comfort of your own hut!)

The weather for our third day was forecasted sunny but cold and windy. Not ideal but great for seeing the sunrise in Velika Planina during crocus season.

My alarm went off at 5.30, when everyone else was still sound asleep. I crept out of the house, put our excited dog on the leash and raced towards the old shepherds’ settlement.

A few photographers were already gathered at the Kapelica Marije Snežne (Chapel of Our Lady of the Snows) in warm winter jackets, gloves and their hoodies pulled over the hats. It was -4 degrees and ferociously windy. Having bumped into my friend Jaka, I decided to join him on his visits to the pretty viewpoints for the sunrise photography on Velika Planina. The clouds obscured the first sunlight, but when the sun finally did peek out, we gasped at the otherworldly views of the sunlit purple carpets of wild flowers among small wooden huts, scattered around the bright green pastures. All set up against a picturesque backdrop of the awakening Kamnik-Savinja Alps.

An hour and a half later I was already back in the warm bed comforting my half-frozen limbs and thinking of the dreamy sights I had just witnessed. Sure, Velika Planina is gorgeous at any time of the day, yet there’s nothing like watching the sun peek over the horizon to announce a new day, especially with the ground covered with endless fields of crocuses.

We left in the afternoon that day after having said goodbye to our cozy hut and with a sizeable portion of cottage cheese štruklji safely packed in the backpack as a sweet reminder of the lovely mountain life. While those are already gone, we are all sure we’ll be coming back for more magic and sweet moments many times in the future.


Wandering about the mountains above Lake Bohinj 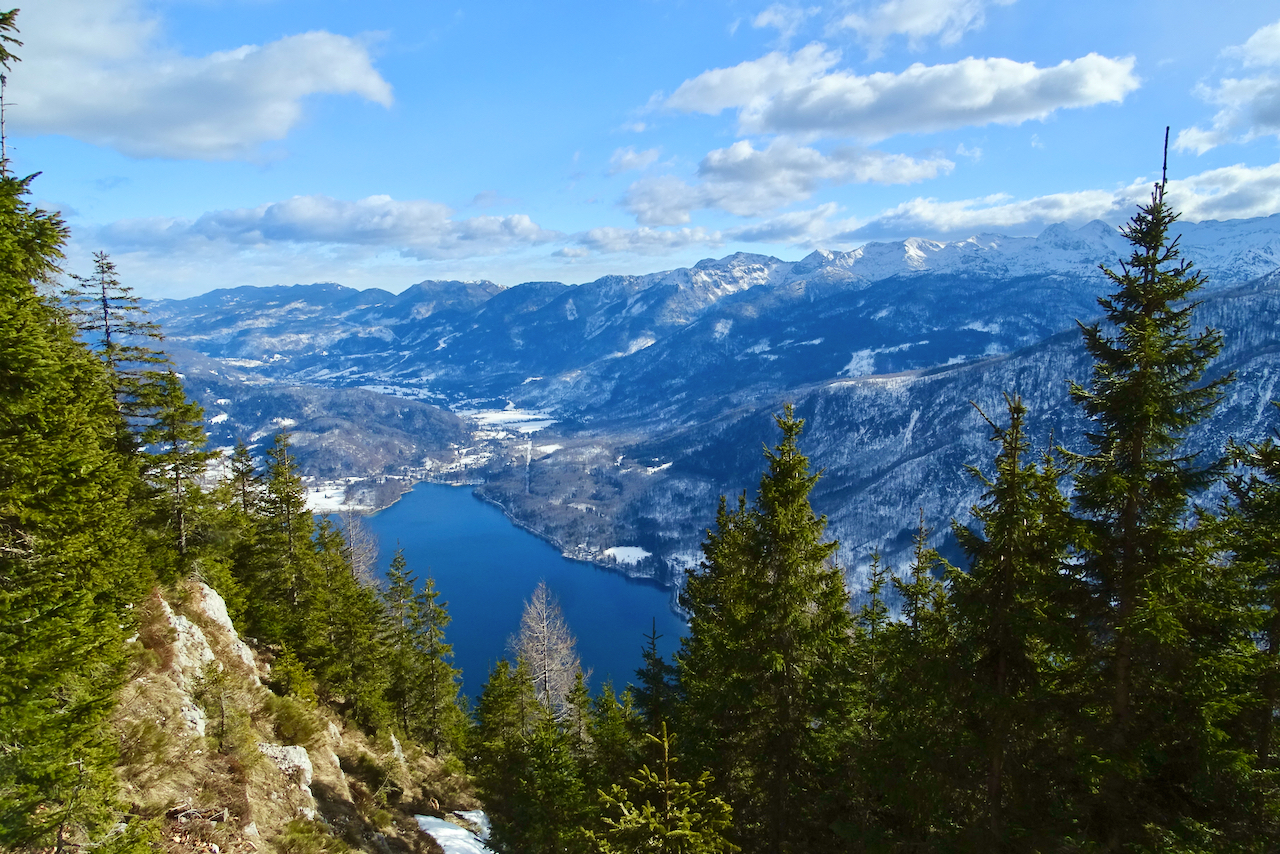 
Viewpoints of Lake Bled for a perfect postcard