Hidden behind a long Alpine valley and a gorge with plummeting waterfalls and a winding narrow road going through rock-carved tunnels, is the high and steep eastern part of the Košuta massif. Measuring ten kilometers in length, Košuta is the longest mountain in Slovenia that boasts twelve peaks of over 2K meters. If the western side of the massif is popular with hikers due to its accessibility and relatively easy trails, among frequently visited peaks being Mt. Kofce and Veliki Vrh, the eastern side seems more remote and mysterious.

You may also be interested in:
Viewpoints of Lake Bled for a perfect postcard
A glimpse of WWI on a stunning traverse from Bohinj to the Soča
Secret gems of the Soča Valley

Here we were below the massive Košuta mountain that was rising up from a lush valley like a cathedral of colossal rock walls which higher up continued into steep grassy slopes. The power of the afternoon sun on an unusually hot May day was slowly dwindling leaving us only with two hours until the sunset. “More than enough if we continue at this pace,” Rok assured me, seeing my concern at the sight of an almost 900-meter wall in front. Rok is a fresh and enthusiastic landscape photographer, who regularly skips hours of sleep in order to capture beautiful sunrises in the mountains. Having done the trail for a sunrise a year ago he was confident it would be perfect to try it out for a sunset too. Like for any crazy mountain adventure, I was in.

Second to the last 2K peak on the eastern end of the Košuta massif, Košutnikov Turn, is at 2,133 m the highest peak, yet, surprisingly, not too popular with hikers. More so with climbers who tackle it from the rocky northern side in Austria. Namely, the same as a good part of the Karavanke Alps, whose part is also the Košuta massif, the peaks along the 120-km long mountain range, that stretches from Italy in the west all the way to Croatia in the east, serve as the border between Slovenia and Austria. Yet, the Karavanke Alps show two completely different faces on both sides; inviting green slopes in Slovenia and challenging rocky walls in Austria.

It happens that Košutnikov Turn is mainly known for its via ferrata which approaches it from the Austrian side. It’s graded as C/D with a short section graded as D, classifying it as one of the most demanding Alpine via ferratas around here. It’s also one of the most attractive routes as it even crosses a hanging bridge above a gap in the mountain.

Join us on a guided tour Triglav from Pokljuka

Our plan was to drive to the Planina Dolga Njiva Pasture in Northern Slovenia, almost on the border with Austria, and from there ascend to Košutnikov Turn on the faster western route and go down on the 15-minute longer eastern route. No via ferrata this time, just a good old hike.

The trail first winds through the forest seemingly innocently until it reaches the hut in the Dolge Njive pasture. From there on, the slopes seem to have a legendary reputation for being steep – you ask anyone who has climbed the mountain and they’ll nod in agreement. You’ll make a vertical ascent of just under 900 meters in a distance of mere 3.5 km, which should take about two hours. It took us 1.5 hours.

“The sunrise is better than the sunset,” Rok immediately concluded when he reached the top. His face looked a bit disappointed but slowly loosened up seeing a huge smile on mine. “Give it time, it’s not even sunset yet,” I persisted, looking at the vibrantly lit mountains on the Austrian side. The sun was still too high up to be able to talk about a sunset.

Read also:
Twelve mountain adventures in Slovenia you will likely fall in love with
The most scenic tour to Triglav

As we munched on our dinner – sandwiches and fried artichokes, the colors of the sky toned up a bit, changing from intense yellow into warmer reddish hues. The Slovenian side of the ridge had already sunk into the dreamy calmness of an early evening, while the Austrian side continued to bathe in the last changing colors of the sunset. The views to the west followed the curvy line of the Karavanke Alps until the distant peaks slowly submerged into a reddish haze. The haze lingered among the undulating green mountains of Austria on the right as well and the further the eye went the more fuzzier the scenery became with only the highest peaks shyly protruding out. A sea of mountains indeed.

Watch the sunset from Košutnikov Turn

The sun snuck behind the mountains and the blue of an evening crept over the skies. We strapped on our backpacks and carefully descended back down to the valley. The sunrise being better or not, experiencing that beautiful and heart-warming sunset up on Košutnikov Turn, we were unanimous it was an adventure we wouldn’t easily forget.


Viewpoints of Lake Bled for a perfect postcard 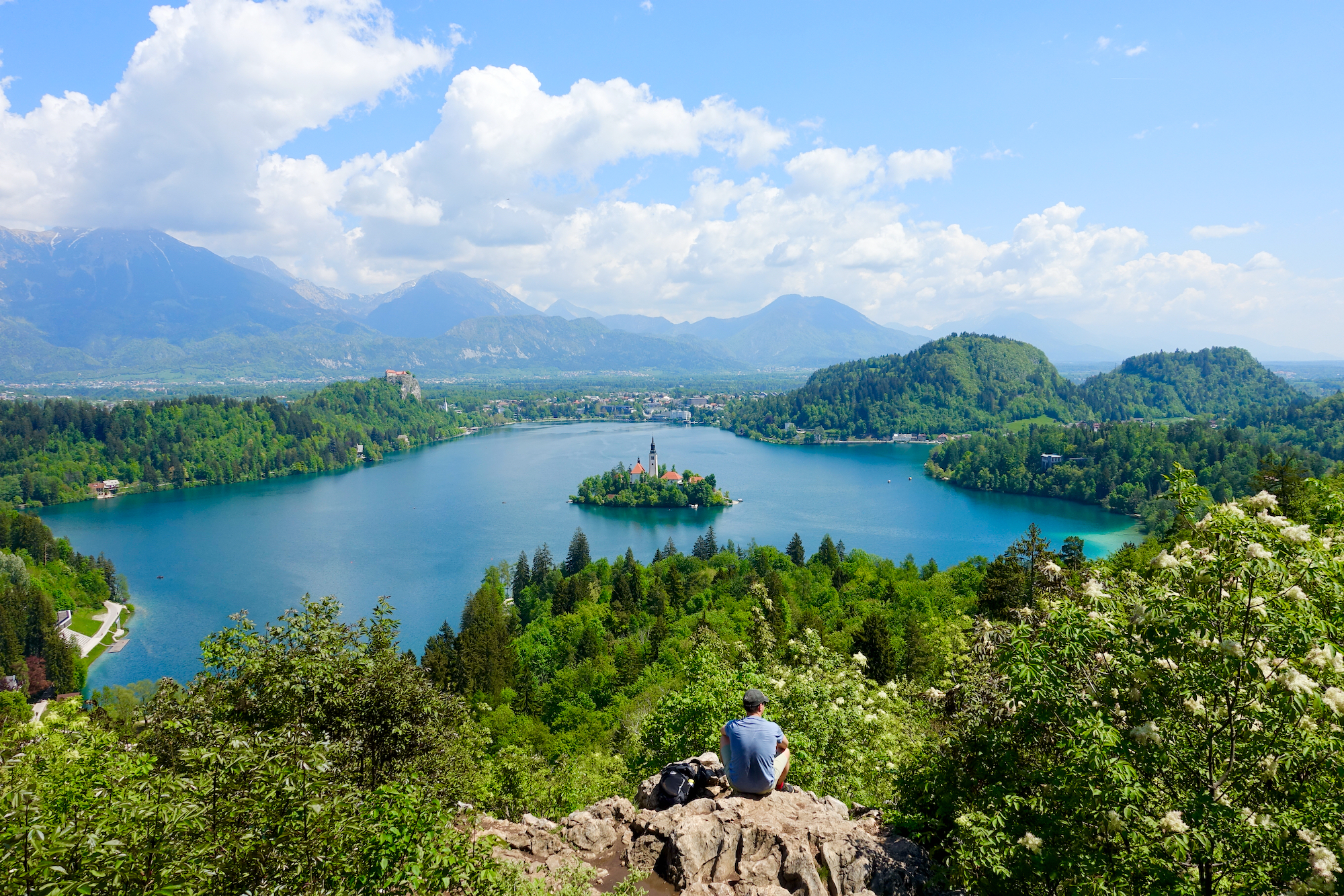